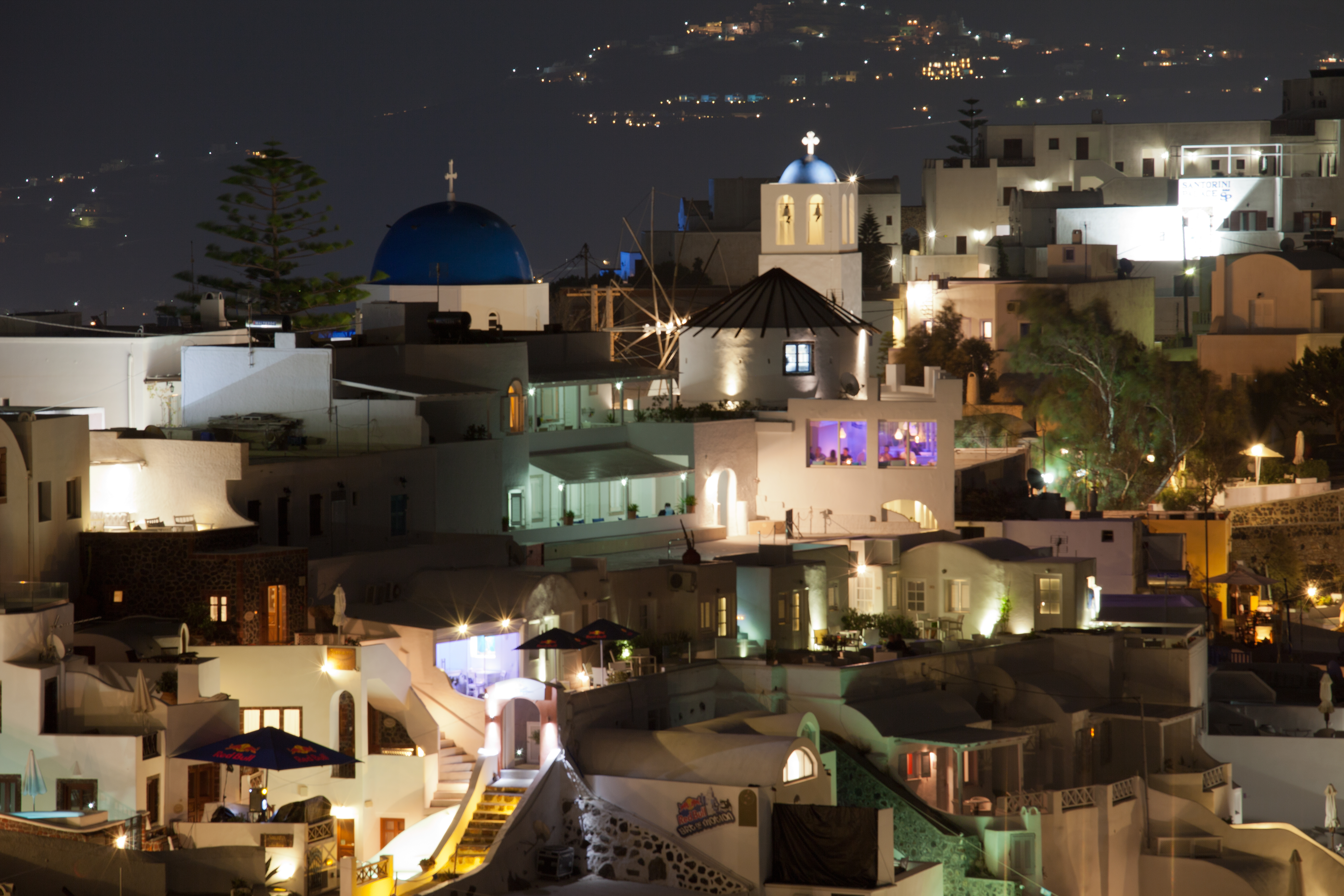 Ok, so I’ve been back for a while now. Gotten the laundry done, sorted out the oddball pile of mail and whatnot. I figured why not time for my top 10 list, right? So here goes.

Here are the top 10 things I’ve learned about Santorini, Greece:

10. Santorini is very cosmopolitan. They have many restaurants there including, yes, a Mexican restaurant called “Senor Zorba’s.” The restaurant was not too far from out hotel and featured a Mexican tile roof with sombrero’s hanging around the doorways. The sign for the restaurant also said, “All You Can Eat BBQ.”

9. The Aegean Sea really is that color. I’ve always heard about “Aegean Blue” and not quite known what to make of it. After having visited, I must confess, it’s really a lovely shade of greenish blue.


7. The town of Imerovigli is impossible for us to pronounce. I was told, “Just say ‘Ima’ and mumble and the locals will know what you mean.” Of course, this lead to me trying to “get away with” as much as I could after the “Ima” finally settling on asking all of the locals, “Excuse me, do you know the way to Imogen Cunningham?” Most of the time I actually got directions while paying tribute to a great photographer.

6. Cave dwellers share music. Most of Santorini is build around a caldera. It’s actually a bunch of small towns dotting the hillsides surrounding the island that’s home to the volcano. Because of the slope of the hillside and the nature and number of cave houses, any loud sounds bell their way all the way up the caldera. If you are a “third floor” cave dweller, for example, you might find yourself listening to music from all the way down at the bottom. This works out well (free radio!) until somebody plays something you just don’t like. (Ahem, we could have done without the gangsta rap, thank you very much.)

5. Santorini is not just home to resorts. There are several medieval cities there with walls and colored doors. This makes for a photographer’s playground, really it does. I started to think that “medieval city” was Greek for “cool photo shoot” after a while. The ancient city I visited was also very interesting to photograph, even if a bit older.


4. Everyone in Santorini, well at least most of the locals anyway, appears to eat Greek yogurt and boiled eggs for breakfast. The yogurt was one of the highlights of the trip for me. I normally don’t care for yogurt but decided to take a taste while I was there, since it’s local and all. Good move there, let me tell you. It’s fabulous! I don’t know what the stuff we have that we like to call “Greek Yogurt” actually is, but it doesn’t even pass for anything resembling authentic Greek yogurt and Greek yogurt is really very delicious. If you ever find yourself in Greece, honestly, it’s a must try. (The boiled eggs? Well, they pretty much taste the same anywhere.)


3. Although surrounded by water, most of the drinking water in Santorini is brought in. Yes, it’s true. Even though the local water is potable, it’s not too appetizing (was described to me as kind of “sandy”) so they boat water in from the mainland. The plumbing in Santorini is not too great either (thanks to tons of old homes on the hillsides) so buyer beware in that regard.


2. The wine in Santorini is wonderful. They grow grapes for wine-making differently there. They actually dig a hole in the ground and wind the vine around itself to make a loop (or circle really.) The grapes then grow down into the hole. Sounds a bit weird but the wine, like most of the southern Mediterranean regions, is wonderful.

And the number one thing I’ve learned about Santorini on my recent trip was….drum roll, please….

A couple of runner-up choices were: