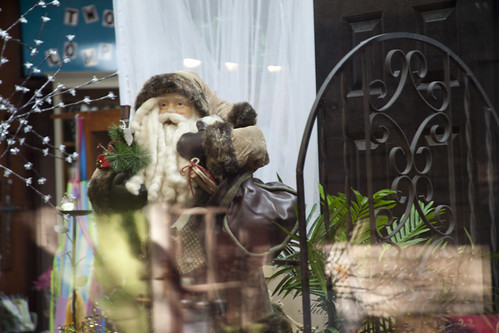 It’s too early for Santa, really it is. Bansky is loose in New York doing things, well, Bansky style things. So far, he sold some of his artwork for $60 in Central Park, he delivered an entire truckload of stuffed animals to a slaughterhouse in Brooklyn and he almost got arrested impersonating Ronald McDonald. (Seriously. I’m not making this up.) All I can say about that is that, well, I hope he gets arrested, simply because Riker’s Island could use some better graffiti (and let’s leave it at that, OK?)

It’s autumn here in River City. Been actually kind of nice out, even a little bit rainy. I haven’t seen my friend Linda in a while. I wonder how she’s been. Art Wolfe went up to Iceland. He’s having a great time there and getting some great shots. Did I mention Bansky is loose in New York? Thought I did. They just sold an original Klimt painting at auction for a bucket load of money. I’m still clearing out my house, getting ready for the new Elfa shelves. I just ate some pizza and I’m blogging now.

I think that the world series has started but I’m really not too sure. I’ve never been much interested in sports. They should have a world series of art, then maybe I would watch. I feel like painting but it’s late now and I’m tired and I really should be cleaning, getting ready for the Elfa stuff. This is a Santa from Salado. I was surprised (but maybe not so much) to see a Santa out this early. Can’t they at least wait until after Halloween? Scott Kelby says that, in five years or less, there will be no noise in digital cameras, none at all. Abolished. Gone the way of the do do bird. (Seriously.) Can you believe that? I guess it’s true though, I mean, they have come a long way in terms of getting rid of it. I’m not doing the East Austin Studio Tour this year. Instead, I’m going to focus on doing some of my own work. I might go out shooting instead. Enjoy myself for a change. I really just want to have some fun and take it lightly. I’m not feeling like doing a lot of shows right now, just feel like shooting, going out, exploring, and having a good time.

I guess that’s enough odds and ends for one night. I’m sure there was something I was supposed to tell you but now I forgot. I know it will come back to me as soon as I push POST. Isn’t that how it always works?