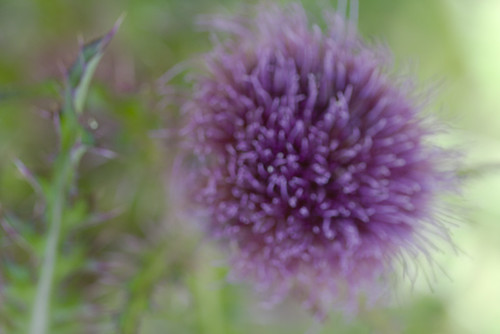 Thistle No 1, originally uploaded by carolsLittleWorld.

A friend telephoned the other day. “What are you doing?” she asked.

“Watching Doctor Who reruns,” I said, “and eating popcorn. I don’t know why but, somehow, I watch nothing but British TV now, Oh, and, this popcorn is really, really stale even though I just got it.”

“I was with a British man once,” she told me, “Did you know that they aren’t usually circumcised?”

“I’ve heard something about that,” I told her, “I think only here in America do we get all sort of ‘cut happy’ when it comes to our infant boys. In Europe, they only do it if you’re Jewish or some such thing.”

“It was really weird seeing the little top hat on it,” she told me, “like it was all covered up under a hood or something. I couldn’t get used to it. I kept just staring at it wondering…watching it, waiting for it to pop out. I kept wanting to ask the guy ‘so, are you going to take his little coat off or am I supposed to peel it or something?’ It was really weird, like I just couldn’t get my head around it…”

And, to think, the popcorn’s still stale. Pffft.