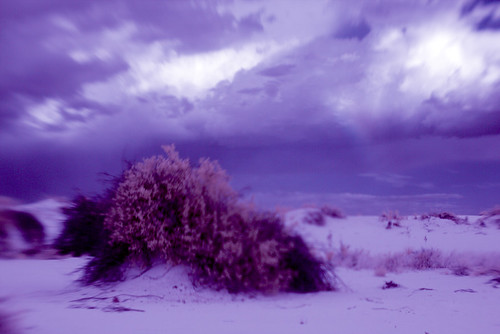 No, no, no, no, I have not forgotten you. I’ve been trying to avoid the home computer, since it’s about blown up. I will try to get a new computer this weekend, we’ll see how that goes. (Anybody got a spare taser I can borrow, you know, one to fend off all of the angry iPhone 3G buying mobs outside of my local Apple store? Yeah, I thought not.)

Chase has been shaved for the summer-he looks really cute san hair but he hates it. He misses to ‘do. Oh well, since it’s been a balmy 102 in the shade, a thick poodle coat is not good to have right now anyway. His curls will grow back, probably just in time for winter too.

The Polaroid film has arrived! Yeah! I’m now the proud owner of 15 packs of TZ artistic film. Wish me luck melting that stuff-it shouldn’t be too hard, since it’s only 102 degrees in the shade today.

I have sent my stuff off for a few upcoming shows, one in Chicago and one in New Orleans. A brief period of relax between the hectic, as the show schedule is really shaping up to be in full swing. Odd, especailly since it’s the summer but, hey, that’s how it goes sometimes.

The Pond Society Tour was fun-really great actually. I think I might have gotten some shots from that, though it’s hard to tell. It’s been so hot, I kind of just konked out when we got close to the end. I ended up missing one pond but that’s ok, I still managed to make quite a few of them and they were good. The ones in the morning, I think, were the best, in part because, well, they were just better ponds and, in part, because I wias a bit more “fresh” and less hot. Hey, at least the mornings are cool.

Hello Dolly! She missed us here in Austin. We got some rain but no major flooding or other “hurricane” type events. Actually, come to think of it, we sure could use more rain. I’d ask for another hurricane but, somehow, I’d guess the people on the coast wouldn’t like me very much if I did that.

My blurb book is stuck in Oregon. What’s up with that? Would somebody please tell me what in the heck is in Oregon anyway? I mean, it’s not like it’s St. Louis or Kansas, or Chicago or one of those places stuck “in the middle.” It’s on the frreaking coast, for Heaven’s sake. I mean no offense to those from Oregon but, why oh why has my package gone stuck there? It’s not like it was en route to Hawaii or some such thing. Bummer, man. Bring her home, bring her home! Out from the wild blurb yonder already.

I’m still secretly (ok maybe not) in love with the Stig, if only I knew who he really was.Speaking of “really was” there really is a rainbow in the picture above. Look to the right of the big orb-like bush and you might just find it, though, I’d never say for certain, seeing as “that would be telling” and all. (And we can’t have that now, can we?)

Oh, all that and, Happy Friday, y’all!