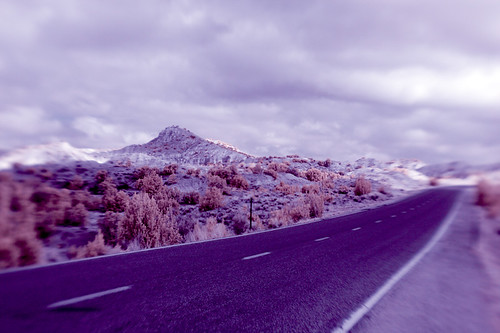 This is an infrared shot taken along the high road to Taos. Speaking of roads, I was thinking the other day (yes, I know, something I should avoid at all costs!) about how funny it would be if Top Gear came to Texas. What does Texas have to do with cars and motoring, and British fellows, you might ask?

Well, for starters, there’s the state motto. Now, I know some of you out there might think you know the state motto of Texas, and you probably think it has nothing to do with cars, driving, and all of that, but I’m here to tell you-you’re wrong. That whole “Lone Star State” thing? It’s just for tourists. The real motto, the “unofficial” motto of the state of Texas is: “Texas. The sun has ris, the sun has set, and I ain’t outta this damn state yet.” Yes, snowflakes, you read that right. Even The Stig couldn’t make it across the great Lone Star State before sundown. (Well, maybe he could, but only if he could avoid getting stopped in Hondo which is, well, let’s just say, quite difficult given their dislike for “driving like Hell” and all.)

Think about it. Texas is perfect for Top Gear.. We have the ArtCar Museum in Houston, the Cadillac Ranch in Amarillo, the Texas Motor Speedway, and even our “official” state roadkill, the armadillo, is cooler than all of the other states. As far as roads and driving go, well, I hate to be humble but, dang, we rock. We have giant interstates and overpasses, pit stops with names like “Wag A Bag,” cheap Mexican food along the highways, drive-through liquor stores, and mile after mile of flat roads to make you lost (or crazy.) Crap, we even have highway 183 which, if you’ve read this blog before, well, let’s just say you’d know it’s a bit “off” yet still, somehow, highly entertaining.

Sure, there’s some downsides too. I mean, there’s that whole, “don’t get lost or you’ll wind up in Mexico” bit and we have DPS (police) people who tend to carry large caliber sidearms and shoot at things that move, and, you know, the odd Marfa lights are something I would not want to drive-through, but still, even given all of that, Texas could make a great setting for Top Gear.

Just think about it. They could try to drive across the state before sundown, be forced to eat an upside down cake at the Cadillac Ranch, do a lap at the motor speedway, and drive an art car through Houston traffic. Even *I* could make something funny out of that. Not to mention the fact that The Stig is already a man in a strange sombrero. Throw it all together and what would you have? Another funny episode of Top Gear. (Well, it’d be that or James May would just complain and burp a lot after eat the wrong kind of chili.)

Now beep beep, get those boys to Texas. As Clarkson would say, “what’s the worst that could happen?”