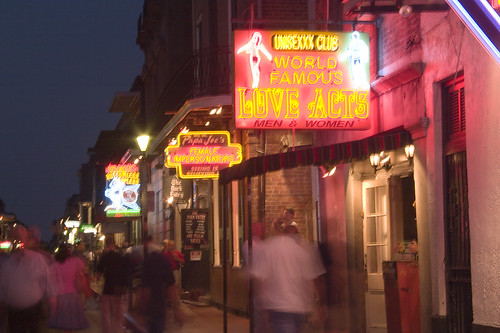 This one a “leftover” from New Orleans. How could you not love Bourbon Street at night?

Speaking of love, but, ok, not exactly in that sense, they opened a new Thundercloud Subs right near my house. When I say right near, I mean, actually, within walking distance. For those of you not from Austin, Thundercloud is, well, it’s a sub place, but it’s so much more. It’s a place where you can go to get a cheap sandwhich, pay $5 for lunch and get change, plop down all day and read a book. It’s very Austin in every sense of the word and now, they’ve got one right by my door. I’m so excited. I feel so “downtown” now (even though, as you know, I actually live in downtown Cedar Park.) I’ll have to, at some point, go over and take a picture of it, just so you can see what it looks like. But, for now, there are visions of fresh Thunderclouds dancing in my head, as I actually ate there yesterday. I had a fresh hummus sandwhich, with black olives, sprouts, and lots of veggies on a wonderful “puffy” roll. Oh the heaven of it all.

In other more, ahem, “boring but still useful to know” news, I got another 4G of CF this weekend. I feel so relieved I have more CF, I was really almost completly out again. Now, I can shoot up the world. Or, at least, the sex clubs that don’t want to be photographed.