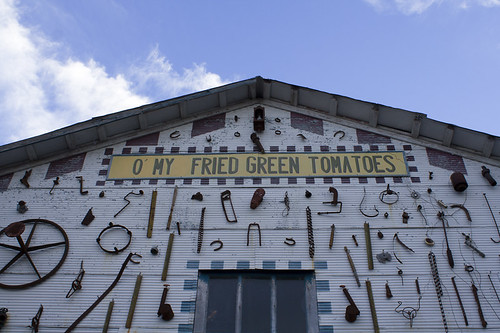 Hard to believe, I know, but this is actually not my favorite sign from Johnson City, Texas. Nope, not even close. (Well, ok, maybe close as this is probably second, or “runner-up” if you will.) I’ll post my favorite sign when a get a round to it which, as you can tell from this picture, is probably stuck on a wall in Johnson City (a “round tuit.” Get it? Oh, ok, sorry, bad joke. I sent you a bad joke without a “bad joke alert,” I should really face a Mexican firing squad for that, really, I should.)

Chase is at the groomer’s today getting clipped. Finally. Boy, he was sure starting to stink and, cute as he is, he was massively furry. A dog of never ending fur, I tell you, he looked like a wild bear cub or something. Fluff ball no more-he’s getting cut. And, let me tell you, he didn’t want to go in. He backed right up and tried to “moonwalk” right out of that place. Poor Chase. I’m sure he’ll be fine, though quite thin, once I get him back. (He has twiggy legs without all that fur to hide them.)

It’s been warm in River City-yesterday was a balmy 82 and, though they say we are expecting showers and a bit of a cold front, the sun has started to come out already. Probably won’t get below 60 today, even with the front. I just hope my sinuses hold out and don’t get the better of me. (I get sick when the weather changes like this sometimes-literally “under the weather.”)

Of course it’s warm outside, I have finally purchased a warm winter coat. It’s all good through, as I’m prepping for my trip to Santa Fe, where it most certainly will be cold-especially in the mornings and evenings, once the sun goes down. Got to love the desert climate-as soon as the sun disappears you freeze your buns off. Weather like Britney’s mood swings-60 degree shifts, running hot to colod to hot, all in one day.

I actually got one of those “3-in-1” Columbia type jackets, with a warm fleece lining and a “weather proof” outer shell. I love those, since they are warm and light which is a powerful combination when you have to deal with ever changing climates and winter that’s not really there but sneaks up on you none the less.

I’ve been hopelessly addicted to Top Gear so much so that I’ve been plotting about how I could get on the show. I really want to be a “star in a reasonably priced car” and sit there, next to Jeremy, giggling it up. If it weren’t for the whole “star” thing, why, I’d be all over that. I just don’t want to make myself famous. But, you know, I could always direct a film, write a book, or take up a hobby that would put me more in the “spotlight,” get on the show, drive around like a fool, and be done with it.

Actually, it’s one of the things I love about photographers. There aren’t really many famous ones. Sure, there are some who make a lot of money, and there are some who, like the song, “everybody knows their name,” but the whole “celebrity” thing sort of avoided the field of photography. This is, usually good by me, except for the whole “I want to be on Top Gear and drive around in a backwards Buick like an idiot” hankering which, I’m sure, will leave soon (the same way it came around: by surprise.)

Hey, it beats painting signs for a living. I mean, imagine the poor chap who has to “touch up a bit of the yellow” on this one. (Oh the humanity!) Giant step ladder, anyone?