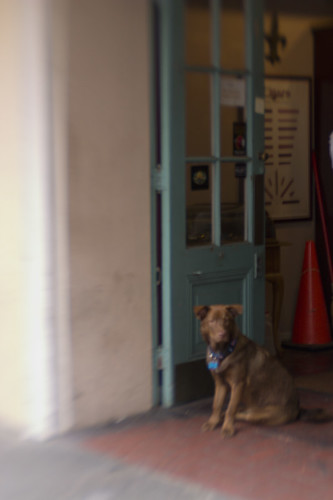 So, I went to my gallery opening, over at the Watson Studio Gallery in Johnson City this past Saturday. An interesting thing about these small Texas towns is that, many of them have a sort of a “square” near the center of town, with lots of small shops and commercial sites, restaurants and things-plenty of shopping but no real “shopping malls” in sight (which, if I had my druthers, I’d prefer, believe me.) Many of the “locals” go to these sorts of things, and, as it turns out, many of the “locals” also own dogs. It’s customary to find dogs tied up to polls, lapping bowls of water as you walk through some of the small towns. (And, once again, I’m happy with this. I like to see dogs become part of society, rather than just the typical “outcasts” as I’ve found them before, in place like the Humane Society or the pound, helpless waiting to be adopted.) It’s always interesting to me though, to walk around and pet the doggies, and I always get a kick out of seeing them “guard” the shops, which, of course, they don’t really do. (Point out the silverware is more like it for most of these pampered pooches.)

The show itself was neat. I got an “honorable mention” which was great and Jane got first place, which was fantastic. (Her work was outstanding-she really deserved it.) There was some really fly pinhole color infrared work from Pisa, Italy that was just fantastic too. I could hardly belive that stuff, all pink and blue-it was like a fantasy land come to life. I got to show the photographer from Hungary my lensbaby, in turn, doing the world a service, since he’s now going to mail order one for himself. (That lensbaby is really spreading around, let me tell you.)

Speaking of the baby, the show is called “Menage a Trois” and highlights works in groups of three. All three of my images were lensbabies I had done while visiting Big Island in Hawaii. (Happy Kona to you!) So, yeah, it brough back memories. (That baby can bend it with the rest of them when it steps up to the plate, belive me.)

I was kind of dreading going out there though, because I thought I had to drive all the way through Austin when, as it turns out, there’s a bit of a “back door” to Johnson City from where I live. You can actually drive through Marble Falls, Texas and take highway 281 due south, to Johnson City. It’s a much nicer ride, let me tell you, with no city traffic, though, going out that way, I made the mistake of taking Highway 1431 instead of highway 29. What a twisty, turny, oh-my-God we can’t even do 35 in these bends, road that is, once you get out into the country. But, the show was great, the gallery fantastic, and I even snuck in a few random shots from Johnson City which I promise to upload…well…sometime soon now.

Sometime that guard dog will let me out, that is.