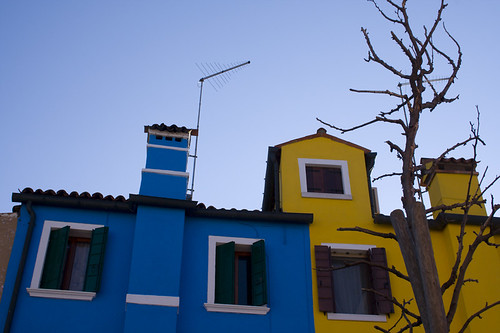 I finally got a new hard drive. I’m excited about this because it means that I can not only backup my stuff, but now I can go out and shoot more. It’s been very cold and rainy around Austin lately, though we’ve had some fantastic fog. The fog’s been so good, it’s making me want to go out and shoot, though (as you probably could have guessed) I’m completely out of Compact Flash again. Time to back some up, free some up, and go shooting again.

I haven’t made much progress on the house but the “digital backload” is starting to move. I’ve actually started going through a few of my old shots from Italy-revisiting some of which I had passed over before. It’s kind of strange to go back and re-visit stuff years later. It sometimes gives you a fresh look at some of the old stuff. Even some of my crappier shots from Italy are better than what I have done recently and some of that stuff was really interesting work. I did some blurry out-of-focus stuff, lots of reflections, and even some crispy sharp-focused stuff (which you can see here.) Actually, this image feels quite timely to me-it almost reads “winter” with no leaves on that tree and, though the houses are brightly colored, the sky is just sort of there. Add in a little fog and it could be Austin, I tell you. It just feels like Austin right now.

It’s an odd sort of season and an odd sort of place to be. Lots of upcoming shows to enter, I’m on the verge of starting lots of new work, and attending a rocking workshop, yet I feel like I’m a jogger and I can’t quite make the finish line. It’s a strange condition. I feel like I’m about to start a race I know I must win, and I’m standing around at the starting line mumbling, “ok, enough already. Let’s get this thing started….”

American Idol feels sort of like that too, doesn’t it? Like we’ve had enough of the train wreck auditions (to last a lifetime!) and we just want to get to “the good stuff.” Yeah, that’s it, man. Show me some “good stuff.” I’m in dire need of “some good stuff.” Even though the trees are thinking about budding, there’s just not enough “good stuff” to get me through the winter.

If you have any to spare, why, please, drop me a line, won’t you?

Until next hard drive packed with “good stuff…”