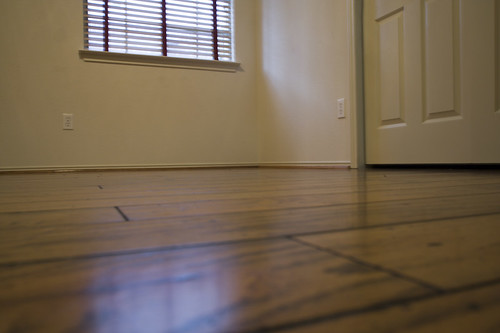 A couple of “quick hits” for this, late Sunday afternoon.

For starters, the Library of Congress (yes, that library. Yes, that Congress) is now making a new push to go on-line with some old photographic gems. Some of the old archives are now being placed on-line, in odd hovels and newfangled websites (such as flickr.) Yes, it’s true, my snowflakes, in a “strange but true” turn of events, I have recently added the Library of Congress as a flickr contact. God, I love the web. Ah, Flickr, let me count the ways.

In other news, this is a (rather crappy) shot of my new floors. I thought it only fair, since, well, since you couldn’t really tell what they looked like from the last shot (Hey, if Uta Barth did flooring, why, I’d be all over it.) Of course, in true Carol fashion, you really can’t tell what they look like from this shot either but, hey, we’re getting closer, right? Maybe sometime next week, I show you a floor you can actually look at (and, of course, by then, you’ll be so bored and will have lost interest but, hey, it’s my blog and I’ll ramble on if I want to.)

The Austin strobist group had a meet up this weekend. It’s going to be interesting to see some of the work falling out of that mayhem. Speaking of mayhem, they used model mayhem to summon up a few extras and, I’m sure, I’ll hit it over there too, at some point (when I’m more set up and ready to do it.) I am not really a big fan of the whole “strobist” look but it has it’s time and place (certainly makes for easy travel. You try stuffing a gigantic soft box in a carry on.)

And, lastly, speaking of a carry on, if you really want to “one up” your friends, you could sign yourself up for this bad boy. Yes, it’s true my snowflakes, you could “travel completely around the world in less than 12 days” taking pictures along the way, so long as you have a valid passport and promise not to come down with the worst cast of jetlag known to mankind. According to the website, the tour will be stopping in New York, San Francisco, Sydney, Kuala Lumpur, Dubai, Paris, and “two other fantastic international cities two continents apart.” Don’t forget to pack toothpaste.

Until next time zone…