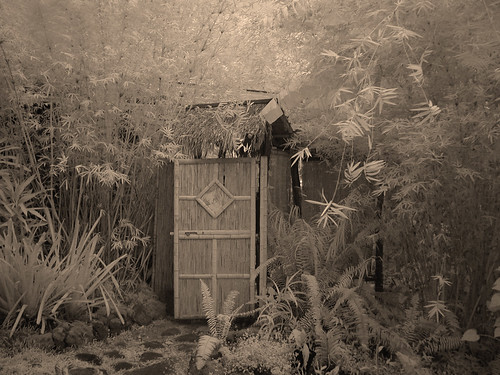 Garden Gate No. 2 (in Sepia), originally uploaded by carolWorldLeader.

I have one of those “question of the day” boards where I work. I also keep a candy jar at my desk. The idea being that, if you answer the question, you get to take a candy. (Most people, believe it or not, actually do answer the question.) Sometimes, I ask some pretty strange questions.

The process started a while back when I was challenged to “come up with some questions that hadn’t been asked.” As you can imagine, this was pretty easy for me. I can think of some really oddball questions, believe me (“What song would you hum if you were trapped in an elevator with a Sumo wrestler and an eleven year old girl?” for example.)

The very first, “my God, I’ve never been asked that before!” question was directed at Slash, from Guns and Roses fame, and it was, “when you perform in France, do people call you Monsieur Slash?” Oddball question to ask Slash, I know, but there you have it. It’s since deteriorated to asking some really, really oddball questions, even for me (which is really saying something.)

The other day somebody posed to Flickr a question about “if you found a roll of film in a thrift store camera, would you develop it?” I immediately thought, “yeah, why not?” but then I realized that not everybody would. Then, I thought of my question of the day.

“If you found a roll of film in a thrift store camera, and you were to develop it, what would be the strangest picture you might expect to find?”

Chew on that the next time you’re scoping out an old Brownie.

PS It might actually make for an interesting project. “Shoot the strangest thing you would expect to find in a roll of film left behind in a thrift store camera.” The Scret Life of Thrift Stores has kind of nice ring to it, don’t you think?