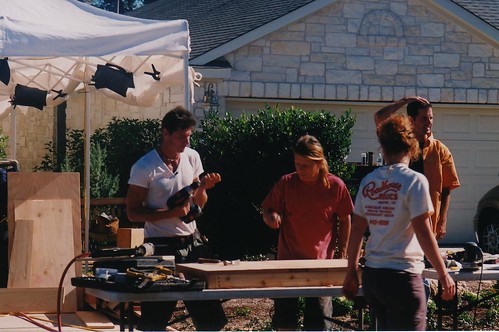 Breaking news on the reality TV front. It seems that Trading Spaces is going to bring back Paige Davis. (This is one of my shots of Ty Pennington taken on set when they were filming in Austin.) The producers of Hell’s Kitchen, A. Smith and Company, have replaced Banyan as producers for the show and they intend to make the show more “heartwarming” (their words, not mine) by bringing back the old designers Doug, Hildi, Laurie, and Frank.

I can’t help but wonder, since the folks who bring us Hell’s Kitchen, are behind this, is Paige now going to turn into a cursing British host. I can almost hear it now, “Oh Bloody Hell, Hildi, you’ve gone and painted the f***ing room yellow again!?!”

Still, you must admit, “Bloody Hell Hildi” has a nice ring to it, especially given what she’s been known to do to poor, unsuspecting wallpaper and all. I mean, if the British swear word fits…

In other “no this isn’t Hollywood but we do produce a lame ass TV show here every once in a while” news it seems the folks who brought you the original have now taken it “big screen.” Yes, snowflakes, I’m happy (ok, maybe “crazed” would be a better word) to report that those makers of that plastic fantastic lens we all love to hate-baby, it’s the lensbaby-have started making lenses for movie cameras. I’d say, “oh the horror,” but it’s so blurry I can’t quite make out ‘horror’ from ‘comedy’ so I’ll just have to leave it at that.

Maybe, in a twisted nightmare come to life, Nicolas Cage can direct his next movie with a lensbaby lens and get that cursing British chef to cater his Oscar party. Meanwhile, I’ll be in the institution, happily watching Paige Davis glue feathers to a wall while tied up in a straitjacket muttering things like, “I used to be normal before these people invaded. Do you remember what it was like in the days before the war?” to some strange insane man knitting a sweater that isn’t really there.

But then, you know, reality bites.