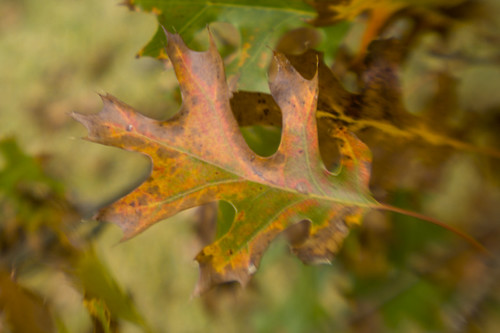 This is an “almost” red leaf from our “almost” autumn-autumn that’s quickly becoming “almost winter” actually. Speaking of all things “almost” this might be as good a time as any to tell you about the first time I “almost” ate at Z.

One of the many photo groups to which I belong (but seldom participate!) is a group of hoodlums known as the Austin Fine Art Photography Group (I came up with the name actually-“thugs with cameras” was already taken.) This wonderful (sure, if you don’t work in law enforcement) group likes to go out and photograph small Texas towns. Sometimes, we photograph bigger Texas towns such as, well, such as Austin itself. One of the more popular parts of town we photograph is the area surrounding 6th and Blanco. It’s so popular, in fact, that we’ve come to call it, well, “6th and Blanco” (for short!)

The area is actually part of an older section of town the locals call “Clarksville.” Former Governor Anne Richards used to live there (on several photo excursions we actually waved at her as she tooted her horn and waved back.) There’s a bakery, a liquor store, a few art galleries, an antiques place, and, of coure, the now famed Z Tejas Restaurant, with it’s familiar patio out front and “million man steps” marching up through it which lead you (presumably) to the front door.

Picture this. We gather en masse on Sunday morning, zero-in at approximately 5 am local (zulu) time and invade the ‘hood. About 20 of us, tripods in tow, camera sacks, vests, empty film canisters flying about, zoom lenses zipping along, the photographic works-it all went down at 6th and Blanco that Sunday morning starting at sunrise.

Tradition held that, after a “long” day of shooting (from about 5 am until noon or when the light got blasted, whichever came first) we’d go drinking but oh-so-cleverly disguise this as “brunch.” So, there we were, 6th and Blanco glowing in the morning sunlight, empty film canisters piling up like red leaves in autumn (HA!) and we start to get hungry (ok, maybe thirsty would be a better word.) We decide to land it at the Z. Take a break, grab some grub, stash a meal, you get the idea. So, we hike the 100 (actually 12 odd so) steps up to the door of Z and ask to be seated.

“How many are you?” the waitress asks.

“Oh, about 40 if you count tripod legs.” Ha ha, jokes on us, as we eventually get a table, plunk our tired (shot off!) butts down, and start to browse the menu. We stash the camera gear at one “seat” on the table and start to catch up. Mind you, we’re a group that’s really good at “catching up.” Some of us go for years without actually talking to each other (you already know about my penchant for attending meetings) so it takes a while for us to get re-acquainted. We start to talk, share stores, yap about the latest in lenses or upcoming shows, and yada yada. Little did we know there was big trouble brewing in the little Z.

The patio at the Z, you see, seats a bunch of people, typically in smaller tables. This time though, for some long since forgotten reason, the wait staff decided to move a horde of smaller tables together to make one bigger table, suitable for the photo masses that had invaded early this Sunday morning. What seemed like a good idea at the time, actually left a giant combined table right in the middle of two different sections for the wait staff and so, snowflakes, that’s where the trouble began. Each waiter, you see, thought we were being served by another, and they all left us sort of “hanging out” in the middle.

And so, there we sat. We yapped, we sipped water (somebody, somehow screwed up and brought us some water) we talked about the weather, we gabbed about the latest in zoom lenses, we heard about somebody’s trip to the Tetons, we talked about what we shot that morning. We did everything, it seemed, except for this pesky thing called “eat” (which, now we know, you’re actually supposed to do at restaurant. Go figure.) About an hour or two went by before someone on the wait stuff (presumably the maitre’d but you know, it might have just been another wise cracking waitress) asked if we’d paid our tab yet.

“Oh no,” we said, “we haven’t even eaten yet….did anybody even take our orders yet?”

Well, it was like we just informed the host that bell bottoms were coming back in style. The shock, the horror, the tips they had passed up. Oh the humanity! To make up for this culinary travesty, they offered up free drinks.

Here’s a tip for all you cursing British chefs in the making, if you ever (and I do mean ever) want to rid your, ahem, “fine” dining establishment of a large crowd of rowdy people do not, under any circumstances, give them alcohol. (It just has “bad idea” but “cold beer” written all over it now, doesn’t it?) In fact, I’d go so far as to say, if our butts weren’t firmly planted before the free booze came along, well, you can surely imagine how they weren’t going anywhere at this point in time now, can’t you?

So, the booze starts flowing, the conversation picks up again, the zoom lenses get compared, the trip reports get tallied, and the food never shows up. Another hour or two goes by but, like, we don’t really care because we’re drinking now. (Horray booze!) We hear, “oh, your food will be out soon now” a few times and learn to say, “thank you” knowing full well and free booze that we hadn’t even ordered anything to eat yet.

After about four hours we gave up and went to Charlie’s house for “3 minute omelettes.” (What, pray tell, is a “3 minute omelette?” you might ask. And that would be a good question, saving the fact that my answer shall be, “a blog for another day.” Be on the lookout for the 3 minute AKA “full contact” omelette blog posting, coming to a Carol’s Little World near you.) Hey, don’t blame me for “almost” eating at the Z. I had to give up, go, and get some kind of food in me. You know, I had to have something to wash down all of that free booze with.

Funny thing about that day too, I didn’t bring enough cash with me to eat (or so I thought.) I was going to bum a lunch off of somebody else, since I forgot to go to the ATM. Turns out I got pretty far on the “nothing but lint” in my pockets afterall. I guess, in hindsight, we only made it up to “Y” that day (But then, you know, that’s a letter we’re all too familiar with here at Carol’s Little World.)