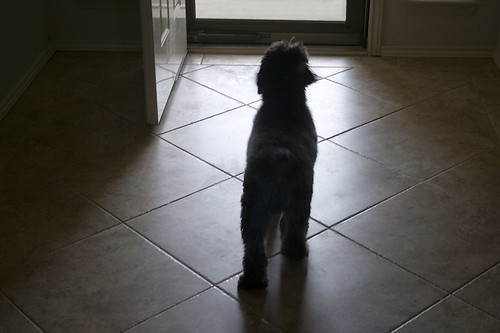 Ok, so maybe new floors don’t exactly have a new floor smell but, as you can see from this picture, this is my new tile floor. Where Chase is standing, there used to be six inch white “generic” tiles, which have now been replaced with eighteen inch wildly colored tiles. At least it kind of feels that way when you look at them. They are sort of pink with swirls of other colors.

The best part about the new floor? It changes color based on the light, so, sometimes, it’s very pink, while other times, it’s very brown. As you can tell from this shot, Chase is no longer afriad of it, he’s walking on it now. (Aww. Poor baby was afraid of the new floor.)

In other news, I’m getting ready for a show and getting ready to send out more portfolios. It’s started to become the busy time of the year photographically again. Things sort of die down in the summertime but, boy, do they sure pick up in the autumn. As the leaves change, the shows stack up and it’s hard to decide where to send work off to again. This autumn, I’m picking a few newer places as well as a few old standby’s, so it should be interesting to see how things wind up. If anybody takes the old “crap-on-a-stick” as it were.

I was talking with Kathy the other day and I told her that I had seen a lot of new bloggers talking about the Austin art scene. “It’s making me want to show my stuff more locally,” I told her.

I’ve always been one to send my work off to the far corners of the world, you know, like I think Outer Mongolia needs more art or something, while neglecting opportunities right here in town. Not saying I’m going to change one hundred percent but it might be nice to do a show in my own backyard every once in a while. Maybe I shouldn’t neglect so much that which is right under my toes, right?