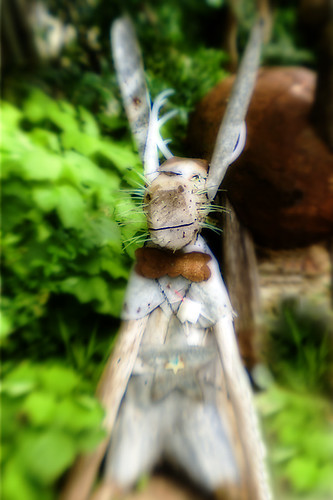 So, a friend recently sent me a flickr mail, alerting me to the fact that an entire new crop of Nicolas Cage snaps have recently been added to the bowels of Flickr. It would appear that, for his latest National Treasure movie, he’s re-creating the annual Easter egg hunt on the White House lawn. At least, it appears that way, given there’s been a flurry of family snapshots featuring half-pint extras in bunny noses, along with the aforementioned Mr. Cage wearing a parka and talking insessently on a cell phone. (Somebody ought to tell him cell phones make you lok fat. Nevermind parkas in June. And don’t scream for your latte, Mr. Cage, they heard you all the way over in Cedar Park, Texas already!)

One particular snapshot features our, ahem, “favorite” actor (turned tampon salesman) running (Run! Run! Run for your life! Oh wait, nevermind. Just keel over if you prefer) from a broom. Yes, my snowflakes, you read that right: a broom.

Now, I hardly know where to start with this tidbit but, as you know (if you read this regularly) I shall make a less-than-noble attempt at “the middle” (leaving, of course, “the beginning” and “the end” in much more capable hands.)

So, what have we established here. Let’s see now: People really need to watch their children more carefully. There are some serious whack-o’s out there (who wear parkas in June!) and, Nicolas Cage is afraid of brooms. This would actually explain a lot, really.

Did you know they make these cute little ‘fridge magnets featuring a 50’s-esque woman blurting out clever sayings, such as, “I’m so happy I could iron!” and, my personal favorite (featuring a likeness of her in her boudoir) “Last night I dreamt my whole house was clean!” Needless to say, except for the bouffante, I could be her. I live in a messy house and hardly clean. I see now that, all along, to clear off the Tivo of unwanted kruft, all I really needed was a dust mop or, to put it more bluntly, here’s some fiction:

“Take that, you tampon salesman,” she said brandishing a broom, “I’m going to sweep you under my rug.”

“But wait,” the evil villain replied, “I’m in your season pass. You’ll never get rid of me now!”

“Ha! Take that,” she screamed, swinging the broom, “and that!”

Ah yes, snowflakes. I’m having some serious fantasies of, not only the entire house being clean (and the ironing done, mind you) but of the Season Pass being cleared of all kinds of unwanted junk. No more CSI Miami, no more weird docudramas about Jeffrey Dahmer, no more Manson Family re-runs, and no more tampon salesman turned actors infesting the TiVo. (Ah, if only. Don’t I wish?)

Still, you must admit, my snowflakes, that’s one bad dust bunny, isn’t it?