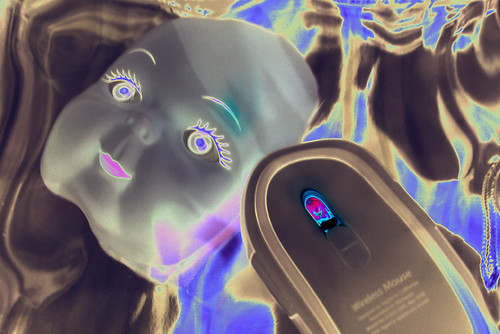 For those of you who don’t know (and that’s probably many of you, since I didn’t know myself) mordancage is not a phrase you emit mere seconds before somebody says, “God bless you.” It’s actually a photographic process, and a very cool one at that. It’s hard to explain in words, actually it’s kind of hard to describe any photographic process in words, but basically mordancage involves bleaching prints and the using a reagent that ties in with etching.

Now, don’t get me wrong, I love the idea of modancage, I’d love to be able to do mordancage, to try it out in my own kitchen sink as it were, but mordancage is a toxic process. I’m spoiled. After working on the computer so long, I really don’t want to put on latex gloves, deal with bleach and all of the noxious fumes, that toxic cloud, as it were, or even mess around in the sink.

Me? Now, while I love (absolutely LOVE) the look of the mordancage print, I’m holding out for a digital equivalent. You read that right. I’m holding out for a modancage button in the old PS49 (or whatever version we’ll be up to by then) so that I can (just like solarization) push a button a be done with it. Yes, you read that right. I’m the ultimate in lazy.

So, it goes without saying really, but, should you happen to flickr, google, yahoo! or somehow crawl upon this, even years from now, and know of any Photoshop actions that would approximate the look of the mordancage, please either email me, leave me a comment, or otherwise help give my lazy butt a clue, ok?

Until next antique process, that doesn’t have a Photoshop action yet, but I’m still itching to try out…