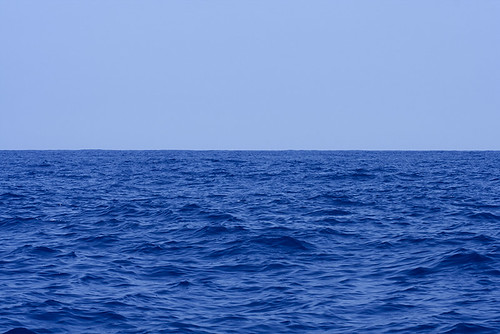 Ok, I admit it. This is not the best photo I’ve ever taken. In fact, I’d go out on a limb here and say it’s not as good as most. It’s not that it’s bad, it’s just that, well, it’s just sort of boring. It’s only one color and there’s nothing happening, nothing going on to draw interest, in the image. It’s just sort of, well, *there* in a boring, dull, lonely old, “why did I waste valuable pixels on you?” kind of a way.

But, I like it. In fact, I more than like it. It’s turning into one of my favorite images. It’s just so…simple. It’s just there. I remember what it was like to be there. Just the sun and the sea, and the little swells of the ocean, gently lifting me.

I mean, it doesn’t scream Hawaii or anything, in fact, it’s so silly, it could have been taken anywhere. Heck, for all you know, with all the manipulations I do, and all the HDR shenanigans running amok in the universe, this could have been taken in my bathtub. It only looks like water, right? I mean, for all you know, why, it doesn’t have to be even really blue now, does it? Why, this could very well be an overgrown glass of H2O from the faucet, Hawaii be damned. (Maybe that blue stuff is really some kind of oddball bubble wrap, disguised as water, photoshopped for your viewing pleasure?)