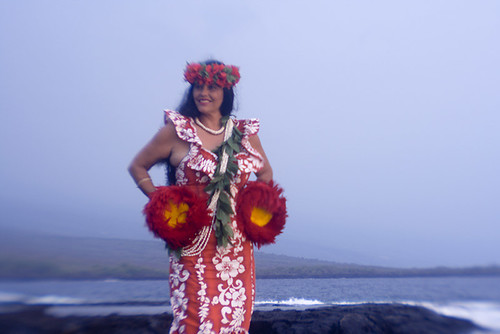 This is a Hula dancer. You would think that it would be really easy for me to photograph a Hula dancer. She’s pretty, she’s wearing a wonderful costume, heck, she even has nice pom poms. (Don’t we all wish we could go through life with nice pom poms?)

But, noooo. Not me. So far, I’ve transfered her, I’ve Ortoned her, I’ve Gaussian blurred her (sounds painful, but it’s not) I’ve reflected her, I’ve done all kinds of “Carol’s at it again” things to her and what do I have to show for all of this?

A mass of confusion, that’s what. The Orton stuff looks “too Orton-y,” the reflections, a bit too abstract, the “stright” stuff, well, just a bit too straight. Geesh. All that and now I can’t make up my mind about any of it. I think I need a vacation or something (oh wait, that’s how I got the Hula dancer shots to begin with, never mind….)

And, um, speaking of “straight,” the good folks in the Badlands (that’s South Dakota in case you weren’t paying attention) had better be on high alert. Rumor has it that the TiVo nemesis of my nightmares, Nicolas Cage is filming a new flick there. (Best guess is that, in some kind of “sequel” to a movie I didn’t get to watch but TiVo recorded 1400 times anyway, Mr. Cage is busy defacing Mt. Rushmore in a slightly nobel but yet somehow still overpublicized attempt at making “high art,” or, um, maybe just gobs of money.)

Well, gosh, I sure hope you weren’t counting on film of the Hula dancer to save the world.

Until next Dead President immortalized in stone…