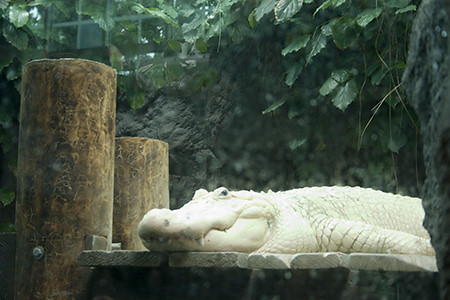 The gator’s white and the bushes are still green. What’s going on here?

This is a oddly colored gator I happened upon in NOLA when I was there just before the storm hit.

I spoke with the zookeeper there and he said that this little fellow is not actually albino, he’s just genetically defined to be white. I said, “oh, you mean, he’s kind of like a blonde?” And he said, “exactly. That’s exactly it. He’s just light in color, nothing genetically different about him.”

Ok, so, that makes me wonder if he would put white out on my computer monitor. (Just kidding, just kidding.)