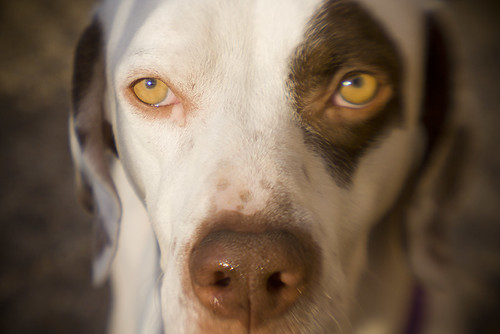 I discuss many different topics on this website. I talk about the weather. I speak of cats. I gab about art. I pine over American Idol contestants. I rip into TiVo. I cover everything from murders to music (and, sometimes both in the same journal entry-thanks to my oh-so-clever “friends” from the …Trail of the Dead and the haunting murder ballads of Neko Case.) I “yap and snap” about bloggers, what’s on television, what’s showing in galleries, and I even sometimes swat at unsuspecting “low hanging fruit,” you know, stuff like cute doctors on House MD, angry mobs at Ikea, my least favorite Law and Order re-run thief Nicolas Cage, and Leslie, the mayoral candidate turned ‘fridge magnet, complete with tiara included at no extra charge. (Oh stop it! I’m sure they all love the free publicity. Armadillo on a leash, anyone?)

I seldom talk about the technology behind the blog, because, well, it’s just not that interesting to me. For a long time, I’ve easily uploaded images-images that I want to share with you, my precious snowflakes-into Flickr, that wonderful image hosting and sharing site, and I’ve used blogger.com’s web services (a fancy name for websites that talk to each other) to upload images into my blog, put them with text, and bring you, my loyal readers, day after day, week after week, month after month, news from my little world. Sometimes it’s good, sometimes it’s bad, everyday it’s different, and that’s the status quo we’ve all grown to love (or, at least, gotten used to, right?)

No, I’m not going to quit on you. (Ha! You wouldn’t be so lucky.) Recently, it seems the sites I use to bring you this site have gone under a sort of, well, what I like to call, “renovation.” Flickr announced that now, in order to use Flickr, I have to switch over to using a Yahoo! id, since Flickr was purchased by Yahoo! shortly after I started using it. And, I guess, they had plans to do this all along (“You WILL assimilate. Into the Borg with you!”) Blogger has been undergoing some renovations of it’s own, having recently announced the end of Beta as we know it, which is quite scary in and of itself because, rules of common logic aside, the Beta version appeared to work, while the new, supposedly “released” version (some call it “gamma” others use the more applicable “broken” while still others just curse at it and don’t call it anything I would repeat here, in mixed company) has been laughingly broken for some time. So broken, in fact, was blogger, that most from the blog-o-sphere refused to switch, fearing that their lives, their blogs, and, in some cases, their livelihoods, would vanish into the “vapor” of the “great blogger switch-a-roo” (which, yes, my snowflakes, really is as scary as it sounds.) There have been rumors, not too exaggerated, of people sacrificing small farm animals in useless attempts at getting their blogs back from the horror of “Blogger never-never land” (it’s like Michael Jackson’s bedroom only without all the llamas and Playstations.)

So, what does all this mean?

Well, for starters, I have to switch to using a Yahoo! ID to use Flickr now. Rumor has it that this doesn’t break Flickr, it just makes it easier to log in (for those of you who use Flickr and can relate, there will be no more “Old Skool” login page, which I’m really going to miss, seeing as that was the only place in the known universe where the locals understood the proper spelling of the word “skool.”) Ok, maybe no biggie, although I’m still guessing I might just be the one to break this (with my dumb luck and all.)

Next we have the great blogger transfer which, I know, is going to cause some mighty big troubles in blogger land or, at least, wreak some serious havoc on my own little blogging universe. This blog is quite old, you see, and it’s grown quite large over time. There are some folks out there who, when attempting to switch from “old to new” style blogging (that would be from “beta” to “broken” in case you weren’t paying attention) found themselves stuck in what could only be described, using highly technical computer science speak, as “the middle.” (You can see now how the new “broken” Blogger earned it’s name.)

The bottom line? Well, through no fault of my own, I might just very well vanish. *Poof* there I go, off into the great bit bucket in the sky.

It’s not that I don’t want to keep blogging (I do.) It’s not that I don’t have an audience who regularly reads my work and comments on it (I do.) It’s not that I don’t like you (I do. I really, really do. Each and every one of you. Well, except for that guy in Jersey who keeps threatening to send me TiVo user guides in bulk if I make one more crack about Nicolas Cage.) It’s just that, well, the technology behind all this blogging is changing right out from under me. It’s like somebody’s gone and pulled the rug right out from under Carol’s little feet. (And I don’t like it one bit. Not one bit, I tell you.)

The only good news to come from this, apart from any future claims I might have of doing one bad-ass Houdini impression, would be the fact that we get to laugh at it until they actually force me to start switching my accounts. Yes, my snowflakes, in a strange twist of irony only I could unearth, it would appear that Blogger itself (well, maybe with the help of Flickr and Yahoo!) has generated more, funnier blogger fodder that I ever could have possibly imagined had I been left “Beta-less” in Bimini. How does that old song go, “it’s the end of the world as we know it….and I feel fine…” (Yeah, right!)

Now I know how the wicked witch of the west felt when she started to melt.