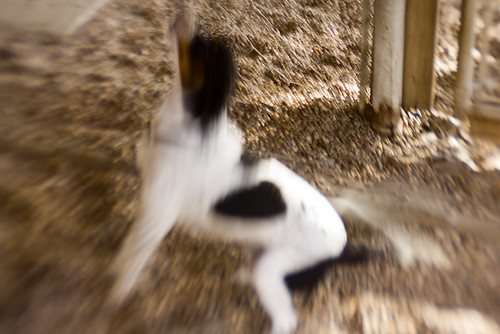 Well, the stoopid bowl is on and I don’t feel like waiting for the next commercial to come on, so I thought I’d blog a bit. I don’t know why they just don’t play the commercials, instead of having all of this “football crap” in the middle of it all but, well, I guess, that’s TV for you. I did enjoy Prince during the half-time show. He was great. But, then again, he’s always great. He’s Prince. Even after all this time, he’s great but he makes me say, “huh? What was that?” You just have to love that in an artist.

I started my “dog project” this weekend too. Went to the Humane Society-ASPCA office to start taking pictures for the show. It’s coming up sometime soon, so look for creative, um, “stories” about me going out “into the wild” to take pictures of animals in the coming weeks. I’m sure the Flickr folks are very confused, as I’ve just uploaded about 20 shots of dogs, none of which are mine. I never upload 20 shots of anything at a time. This is a new first for me but, as it’s supposed to be, Flickr is not my final format. It’s my “kitchen table,” you know, a place where I can go assemble my work for presentation in other spots-places like here and upcoming shows. Sure, when I’m not using it for that, it converts over to a mainline view into my world but, hey I need it now so back to work (for me) it goes. Don’t blame me if the Flickr-ati is disappointed. I can’t help it if I need my stream for it’s intended purpose.

Shooting at the ASPCA was really interesting. The dogs were really cool. This little guy even did tricks. He could sit, stay, jump, and perk himself up for treats. This is an action shot of him jumping up for a treat. Such a shame that he hasn’t a “real” home, what, him being a trickster and all. Somebody really should go and snag him.

I’m still working on teaching Chase a new trick. It’s call “sitting still.” What’s that they say? You can’t win them all.