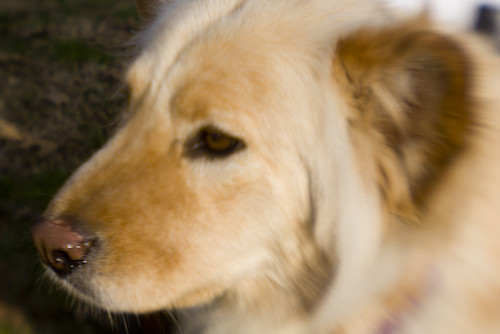 This is Maggie, from the Humane Society. She’s a great dog, part chow, very soft and fluffy with a long tail and cute, pointed ears.

I’ve been very lazy and have yet to finish off shooting the Town Lake Animal Center or the Service Dogs. Yesterday was fantastic though, we got to to into multiple empty buildings in Burnet and shoot around lots of old junk, not to mention I got to shoot the other end of the train (that would be the Hill Country Flyer) which was parked in Burnet, where it rests when it’s not in Cedar Park. The sun was high and bright, which sucked, but we got to sneak (um, “break and enter?”) into a bunch of abandoned places which did wonders for the light.

It’s amazing how, when you let yourself into someplace fantastic, the light suddenly starts looking better, isn’t it? Well, maybe you don’t know, but you can take my word for it.

Today was also eventful in my old ‘hood as it was the annual running of the Daytona 500 over in that *other* sunshine state: Florida. Rumor has it that my least favorite Law&Order re-run thief (Nicolas Cage) coupled with my most favorite American Idol alum (Kelly Clarkson-no relation to the school and believe me, I would know) were part of the “stationary” entertainment. Sounds like hot wheels cool tunes, and um, a really crappy fake NY accent saying, “Gentlemen, start your engines…” to me.

And speaking of “zoom zoom” B&H should be open again, at least I hope it is. I need to get me a new wide angle, a flashcard reader for the laptop, and like more gobs of compact flash (when do I not need some of that?)

In other more, “boring” news, I have switched over to the new blogger and, from what I can tell, nothing has blown up. To quote that great philosopher, Marvin the Martian, “Where’s the Kaboom? There was supposed to be an earth shattering kaboom!”

I guess it was just so soft and fluffy, nobody heard it.