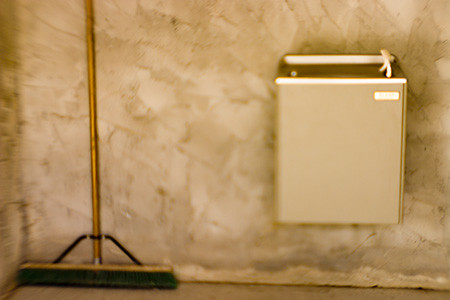 I spent a lot of time clearing off my junk mail table at home this weekend. I don’t know why I get so much junk in my email and then so much junk in my real mail box. Do I look like I need more junk to you? (Nevermind, don’t answer that.) I do feel a lot better, although tired, from cleaning a bit. It wears me out but it’s a necessary evil at times. Sometimes, I’m afraid to remove that protective layer of dirt but then I remember what it’s like to be clean and just go for it.

Speaking of “going for it,” Chase got into another fight with a lawn sprinkler and I managed to take some pictures of him during the aftermath that ensued. If they come out, I’ll post them sometime next week.

On Friday, I went to a “painting with light” workshop that was held at an old cotton mill in Pflugerville, Texas. For those who’ve never done it, “painting with light” is a photographic technique where you leave your camera open with a long shutter speed and them move light around inside your image. As the light accumulates on the film (or camera sensor) you are said to be “painting with light.” It was fun, although I’m somewhat limited to 30 second exposures, due to my lack of interest in my camera’s bulb setting and my complete disregard for using a cable release or remote. Hey, my thumb ought to be good enough for anything (well, almost anything. Nevermind. Forget I said that.)

I had attended one of these before, only that one sponsored by a high-end “professional” photographer type club. They recommended all these odd (but expensive, I’m sure) lights to try it with, and were very careful about the placement of the lighting, paying particular attention to the architectural details of the building in question. This one was more like “crayon with light” as we just sort of bathed the entire building with a giant $40 3000 candle light used typically by hunters. Hey, whatever works, right? (Actually, I’m fairly certain the “crayon by light” worked better but, SHHH, don’t tell the “pro’s” or they’ll get jealous.)

This week, look for entries about pricing artwork, which I’ve promised to discuss at some point and maybe some additional oddities I’ve spotted along highway 183 because, well, they are there. (Do you really need more of a reason than that?) If I can get it together, I might be able to pull off another PhotoFriday entry but that depends on the topic and my mood at the time. Come to think of it, so too do all of my entries for the week.

Speaking of moods, I’ve been quite sour lately. I think it’s partially due to the heat. I tend to dehydrate quite easily and get very grouchy when I do. I have to start reminding myself that autumn is not all that far away and it won’t be long before those late summer storms start stacking up in the Gulf of Mexico to help cool our nights.

The folks in New Orleans, now, they have reason to be sour-look at what those summer storms did to them last year.