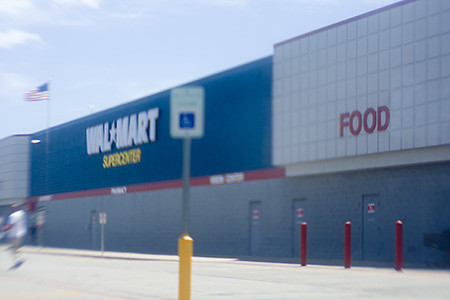 How long does it take you to buy gas? How much time do you spend at the pump? Ten minutes? Maybe fifteen if there’s a long line?

I just got back from visiting my local Wal-Mart store in Cedar Park, Texas. I spent one hour and thirty minutes and it was an experience that I will never forget. I have never experienced such bad service, and I still do not have gas in my car.

First off, if you want to buy gas in the Cedar Park Wal-Mart, they advertise one price but it is only available to patrons using a Wal-Mart gift card. We’re forced to go into the store, to put money on our cards (what should be an unnecessary step to begin with, but I understand how you want to reward loyal patrons with lower prices) only to wait in long lines thanks to understaffing.

Tonight, I was second in line. The lady in front of me was purchasing a product from your grocery area which did not have a price. The cashier repeatedly called for assistance but none was given. She apologized profusely for making me wait and, since I was a mere 20 minutes into my Wal-Mart ordeal, at the time I brushed it off and told her no problem. “You really should blame the folks over in the grocery area,” I told her, “I mean, they don’t put prices on anything.” As I left the register, I was handed a receipt showing that my gift card had a balance of $83.51.

Then, I get into my car and drive over to the pump. After waiting in long lines for a pump, one opened up, and I scanned my card. Some of the pumps in the Cedar Park Wal-Mart gas station do not work correctly-they have problems scanning and reading cards. I tried three times to have the pump read my card but, again, no luck. The shoddy Wal-Mart equipment is only surpassed by the rude behavior of the staff.

So I drove around to another pump, waited in another line, and then decided I would go to the cashier. Lisa, was her name and she was exceptionally rude, even in a land of rude sales clerks. I told her I was trying to buy gas and I pointed out the pump I was attempting to use. She told me she needed the number of the pump and made me walk back and get it saying, “she couldn’t see from where she was sitting.” She did not get up to help me, and she was rude. I could tell from the look on her face, she knew the pump number, she was just lazy and rude, typical Wal-Mart behavior. Ok, shopping at the Cedar Park Wal-Mart, I’ve grown to accept and actually expect rude behavior from your sales clerks-if I can even find one, so again, I brushed this experience off.

After another twenty minutes at the pump, I was told (rudely by “lovely” Lisa) that I would have to go back into Wal-Mart because “we’re not the same store.” Strange, it says “Wal-Mart” on the gas station, care to explain this to me? Does she get a paycheck that says Wal-Mart? I would strongly re-think that if I were you. But then, what do I know? I’m only a customer (and, they way you treat us, you won’t have many of those to worry about for long!)

Then, I waited while another employee called for the manager, James-another long wait for no apparent reason. He came over and treated me like dirt, citing that “he just walked up to me,” and “he was only talking to me for two minutes.” I told him that, since this was the second time I have had problems with the same Cedar Park Wal-Mart, that I wanted to clear out my gift card and get my money back. He made me walk through the entire store and spend additional time at your Customer Service area. Still no gas, still the same rude behavior from the staff, hey, it’s Wal-Mart, what do I expect right?

James really made my ordeal a lot “better” because, at one point, he tried to tell me my card was showing a balance of $83.51 and I told him I wanted to clear it out anyway.

I told him, “well, what have you done to earn my trust. So far, all you’ve done is be rude and lie to me. Does that make you trustworthy?”

I guess he did not like my response but I spoke the truth. When he subsequently tried to get the balance off my gift card, it read $0. So, if I had taken the card, drove back out to the pump and the ever-so-rude Lisa, I would have repeated the ordeal, only adding yet another hour of time onto this already infinite loop.

By the way, I still don’t trust you and yes, you can take it personally. After spending an hour and a half, not getting gas, and getting treated rudely by your entire staff, I can tell you this. I’m organizing a boycott of Wal-Mart.

In protest of the poor service, rude staff, and shoddy customer experience boycott Wal-Mart on December 1st. Don’t go there. Send them a message. Tell them we won’t put up with their shoddy service and rude clerks anymore. During the height of the holiday shopping season, make them feel the pinch. Let’s band together to make this happen.

Personally, I have cashed out my gift card (yes, I did get my money back) and will never step foot in another Wal-Mart. Soon, a Super Target will open near my house and I will frequent that, as well as my trusty, loyal, nice H-E-B. I sincerely hope Super Target drives all the employees at Cedar Park Wal-Mart out of work and hits Wal-Mart in their bottom line. It couldn’t happen to a nicer bunch of people or a more deserving lot really.

And now, if you’ll excuse me, I’m off to stage a boycott and buy some non-Wal-Mart “friendly” gas.