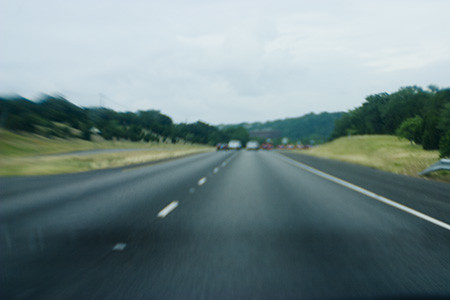 What do a tattoo parlor, a strange fortune teller who sells toys in the back of her Tarot card reading shop, a Lack’s furniture store, and an autobody repair place that advertises by placing half a car on their front sign, making it look like somebody was just in a wreck, all have in common?

They are all strange oddities on Highway 183.

US Highway 183 runs from Refugio, Texas to Westhope, North Dakota. In the state of Texas, it passes through the northwest quadrant of Austin-it snakes down along the east side of town en route to it’s final destination, somewhere near Houston, in the town of Refugio. Highway 183 is a commuter road-a highway traveled by people coming and going to work. It’s also home to a disproportionate number of highway overpasses as it runs through Austin, so much so that north Austin has become known as the “land of the highway overpass.”

It also houses funky weirdness. It has strange mojo. Some speculate that, because the city of Austin grew so far so fast, former “funky” storefront businesses (like the fortune teller, who will happily read your Tarot while her children play in the next room-hence the toys) have not yet been “squeezed out” by the financial “pinch” of the big box stores. Others, like me, maintain that Highway 183 is just weird.

On Highway 183 in North Austin, you can eat at one of 4 IHOP restaurants (pancakes at 3 am? Not even out of the ordinary for this highway) buy a set of Catan or a popular comic book at Thor’s Hammer, have your aura read, stop off for some fresh Austin ink at Tattoo Zoo, fix your broken bumper at a body shop with half a car on the front lawn, or devour a Krispy Kreme doughnut in a shop nestled between two different gyms.

Nothing too odd about that now, is there?