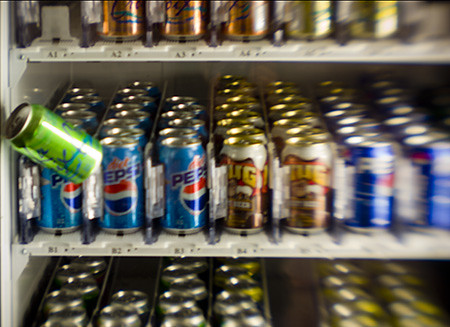 There’s a vending machine I know that sells cokes, sodas, juices, and, yes, root beer too. An interesting thing about this particular vending machine is that, sometimes, the cans get stuck in it. On their great journey, on the personal exciting adventure, they find themselves haplessly stuck against the glass. Like Huck Finn himself, they try and try again, to fall down into that dark chamber, that opening known as the “bottom” of the machine, that great unknown crevice, where they know the hand of the giant (that would be you) will come to free them. But, no, they get squashed, face first, against the front of the machine, suspended, hanging indefinitely, apparently defying gravity or, at least, breaking some bad ass laws of physics.

An even more interesting thing about this phenomena occurs when I observe the reaction of people who recently tried in vain to purchase a cold beverage only to discover it got stuck. When denied their icy cold beverage of choice, some people get mad. They bang the glass. Like helpless prisoners clanking tin cups against their jail bars, they become convinced that, the more they bang, the harder they slam, the louder they get, the more likely their can will fall to freedom. “To Hell with the other cans that get stuck, to hell with the laws of vending and the great gods of Pepsi, I want my root beer!” They chant uselessly. Others just laugh or, maybe, cry. Not really cry, I can hear the whine of discontent in their “Oh’s,” “Ah’s,” or “Damn’s!” from where I sit. Some resort to tipping the machine-a maneuver which is neither safe nor results in the expulsion of their icy cold beverage of choice but must, somehow, satisfy their pent up rage.

The other day, I was in the vending room and a lady came in to have her lunch. She pressed the button for “coke” but got instead a root beer. Acceptingly, she put the root beer down on the table but, as the microwave beeped, indicating to her that her lunch was now burning (but probably still frozen in the middle) she tried to pop the top off the root beer only to have it explode from the pent up fizzies inside of it. In hindsight, I guess she should have gone out for lunch that day (the vending machine really had it out for us then.)

And, please, don’t even get me started on the candy machine.

Until next root beer…