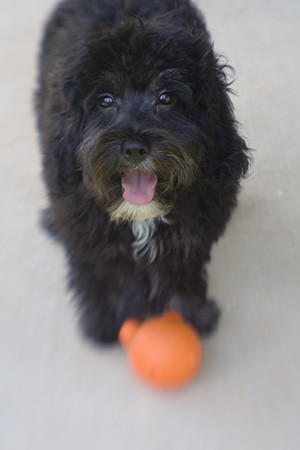 Life with puppy can be fun. Everything’s new to puppy. He lives in a world of new smells, new sounds, new sights. Things that go “bump” in the night make him curious. Things that you and I take for granted? Well, it’s a new world to him. Yesterday, he attacked a lawn sprinkler. He didn’t care that he was getting wet-he “went for it” with reckless abandonment. It was new and he was excited to find out all about it.

I dropped an ice cube on the kitchen floor and it was like I got him a new squeaky toy. He was running, chasing it around. He barked at it as it melted on the floor. He chases shadows too because, well, they move and he can.

He attacks Austin too. Waking up, jumping really, from a sound sleep, barking in his little “chirpy” voice, desperate for Austin to play with him-he pounces on the poor old guy (who’s actually the ripe old age of 3 years old this month too.)

I took Chase to the vet-he’s healthy and now caught up on his shots. Today, he’s at the groomers, having his hair done. When I took him this morning, she looked at him and said she couldn’t cut him. “That’s baby hair,” she said to me, “it won’t grow back. You shouldn’t cut it.” How was I supposed to know he’s all puppy fuzz? (She’s trimming his nails, giving him a bath, and maybe cutting out his eyes so we can see his little face better.)

Little fellows all curls and attitude, I tell you. He’s 8 and a half pounds of mischief, all wrapped up in a curly little package.

Until next puppy tale…