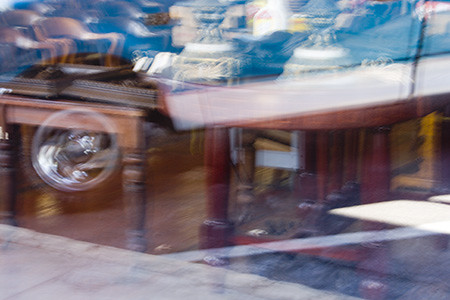 Every town has one. That stretch of road where the pavement bends, maybe the hills rise up just the right way, the traffic ebbs and flows wrong enough to make it slightly dangerous. Along Highway 183, in north Austin, between Oak Knoll and Braker Lane is an expanse of highway I like to call Dead Man’s Curve.

An interesting thing about Dead Man’s Curve, is that it’s right near Chuy’s, on the north side of Austin. Actually, it’s over Chuy’s. As you maneuver, swerving to avoid being swallowed by Dead Man’s Curve, you can see beneath the overpass, if you look down, the naked Chuy’s man spinning the world on his shoulders (which is the statue marking the entrance to Chuy’s on the north side of town.)

Should you happen to miss Dead Man’s Curve, well, I suppose, you might catapult yourself off the Highway 183 overpass, onto the top of the Chuy’s restaurant, taking out the naked spinning man with a globe on his shoulders as you fly by en route to your untimely death.

An interesting thing about Chuy’s on the north side of town, apart from the fact that they have a statue of a naked man spinning a globe on his shoulders to mark their entrance and that they serve vegetarian re-fried beans, which are really hard to find, is the fact that, if you were to catapult yourself off the Highway 183 overpass, take out the naked spinning man with a globe, and land right atop the margarita machine (or, for that matter, the tortilla machine, or maybe, the vegetarian re-fried bean machine, if there even is such a thing) is the fact that this still would not be the single strangest thing we, the drivers of Highway 183, have seen. (Nope. Not even close. Not even in the category of “a little unexpected” really, except for maybe the re-fried bean part.)

Every day we, the drivers of Highway 183, navigate the overpasses, avoid the potholes, dart around the slow moving trucks, and curse the construction and, everyday, thousands of vehicles take the not-so-gentle curve to the right by trimming 5 mph off their speed limit, lightening up on the accelerator, or, like slowing down to see if he’ll spin back around again, so we don’t have to look at his naked butt.

Somewhere, along Highway 183 in north Austin, between Oak Knoll and Braker Lane, is an expanse of highway that brings out the ghosts in all of us. Dead Man’s Curve, marked by it’s naked man spinning a globe on his shoulders is lurking, waiting for that one time you forget-you neglect to take your foot off the gas, lighten up on the accelerator, or forget to notice him, take the curve too fast and BAM! Miss it.

Dead Man’s Curve is waiting. Will you be ready for it?

Until next drive by…