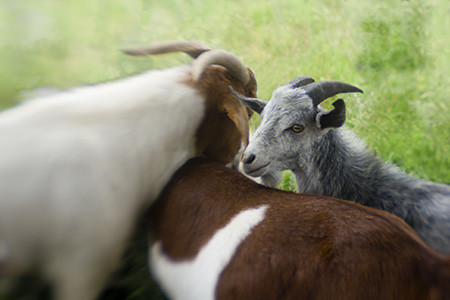 He likes to butt things with his head, that goat does. He must be a world cup soccer player, that’s all I can say. I mean, aren’t they famous for butting things with their heads?

Speaking of world cup, what a great game. I’m so glad they got rid of the coin toss to determine the winner when there’s a draw. I know Italy would have lost. And, the best part? I’m fairly certian that now famous French head butt cost them the game and, in turn, the cup.

I mean, had he used his head and, like, *not* actually used his head but screamed at the guy or something, he would not have been tossed out of the game. And then he might have made the goal. And then France might just have won.

But, no. He had to go stick his head in where it didn’t belong. Serves him right.