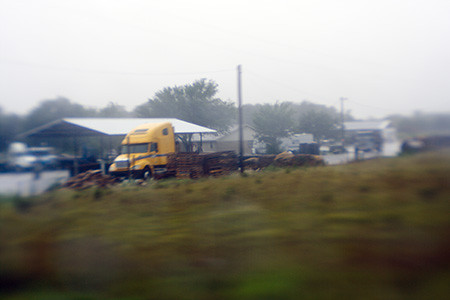 I followed a canon to work the other day. I don’t know why but I see the strangest things on Highway 183. I mean, the absolute strangest. Take strange, put it in a blender, push “puree,” and that’s what I always seem to follow to work, in the morning, down Highway 183. It’s bizarre.

I don’t know why some guy was driving down Highway 183 with a canon, really, I don’t, but he was. He actually had two of them, back to back, in a little pull trailer. One of them was facing right at me. The funniest part? I didn’t notice it right away. There I was, sitting behind the wheel, bopping down Highway 183, radio blasting, sunroof open, cool wind blowing through my hair, and a canon pointed right at my chin. I started following him, pretty closely in traffic, looked up, and thought, “Hey! That kind of looks like a canon.” Then, I realized it was. It took me a while to ask, “what the…”

Speaking of facing canons, I read perhaps some of the funniest flickr action I’ve seen in a while. Seems some guy scanned in a Cartier-Bresson and put it in one of those obnoxious “Delete Me!” groups on flickr. The comments! Oh, how funny!

My favorite was from some girl who kept insisting, “something has to be in focus. It’s too soft.” Wrong! Ever look at a pastel? Or an oil painting? How about a watercolor? Hint: They aren’t always what you were calling “sharply focused.” Nimrod.

These online groups are filled with crappy photographers who like to mouth off. If you want to get good, and I mean really good, one of your tasks is to learn to take criticism and direction only from certain people. You need to learn to find people who appreciate your work, seek them out, and take their criticism, because they understand your direction, and ignore the “chatter” since it’s less than useless. It only drives you crazy and doesn’t lead to better photography.

The other folks? The Delete Me! and flickrati who love to plop comments down on everything but have crap in their own streams? Just noise really.

Nothing but loose canons running around in cyberspace if you ask me.