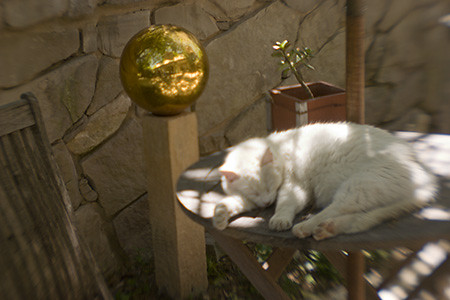 Since poor Charlie has passed, recent attention has turned towards getting a pet. A few of my friends have suggested I get a cat. This is where the fun starts.

I sort of have this love/hate relationship with cats. I love them and they, it would appear, hate me. To paraphrase Shirley Maclaine, “They hate me. They really, really hate me.”

Cats like to climb on my lap and stick their claws into my thighs (and, I’m here to tell you that, despite all the “extra padding,” it hurts when they do that. But they seem to like inflicting pain, so they keep doing it.) They swat at my nose when I sleep and hiss at me when I try to pet them. They just can’t stand me for whatever little “kitty” reason they might have.

Ok, I admit it. I’m kind of afraid of cats. They have fangs, big claws, they hiss and spit and lunge at things. They’re fast and they stalk their prey. I don’t like any animal that stalks it’s prey. Can’t I have a vegetarian pet please? Like, something that eats twigs, nuts, and the like and maybe arm wrestles me for the tallest blade of grass in the lawn? (Yeah, yeah, I know, bears eat honey and we’re all still afraid of them and Charlie once caught a blue jay in his mouth but I wasn’t afraid of him. So much for that theory.)

Truth be told, I don’t really like cats and I don’t want to keep one as a pet. I never want anything in my home that’s smarter than I am. Yes, it’s true, I’m an intellectual snob in the pet department and I really don’t even want to consider anything that’s capable of outsmarting me (dogs are great for this. Despite the fact that I rival the intelligence of a door knob before I’ve had any coffee in the morning, I could still out wit a doggie. Let’s see you try that with a cat.)

Besides this, I’ve always thought of cats to be a bit, well, boring. They just sort of sit there, don’t let you pet them, hiss and swat at random odd things, and annoy the local dog population who, as we all know, are the *real* pets in the neighborhood. (I always thought it a bit cruel when a cat “shows off” and out smarts a dog, I mean, what’s he got to prove? Everybody knows dogs are as dumb as bricks-that’s why we love them, right?)

No, getting a cat would be just so *wrong* for me. Just think of what I’d have to suffer. The cat would scare me every time he jumped on my lap. I’d constantly be thinking he was about to claw me to death. He’d scare me when he swatted at my nose in the morning, to wake me up (I have a hard enough time sleeping as it is.) He’d scare away the neighborhood dogs. He’d hiss at me every time I walked past him. Heck, it’d be a house full of shivers really. (That and my kitchen counters would no longer be safe.) I’d be so afraid, I’d have to name the poor cat “Boo!” Boo! Because I would be afraid of him. Boo! Just like a spook. Boo! Just like Boo Radley. Man, I’m scared just thinking about a cat.

The other day, on flickr, several people uploaded, within minutes of each other, images of Cheshire cats, photoshopped, of course, for our, ahem, viewing pleasure. This really scared the bejesus out of me, as you can probably imagine. If I don’t like “normal” cats, just think how I feel about the Cheshire variety (Oh, that evil grin!)

So, it’s late at night, and I’m hanging my clothing on the line, after doing laundry, and my mind starts racing, the way it always seems to do.

“What if a Cheshire cat crawled up and over that fence? What would I do? What if it crawled over and tried to eat me-me and my freshly laundered socks?”

“You fool,” (I tend to talk to and answer myself when my mind races. Ask my other half why, and maybe, just maybe, it will tell you.) “Cheshire cats don’t really exist.”

It’s true. We do. In Texas, where I live, there’s coyotes. Wild ones, with big teeth, and fangs, and claws and they come into my yard. They’ve been there before, really they have. Their large and vicious enough to climb fences, get into yards, and like howl at the moon and do all sorts of “coyote” things that we don’t know about. But, I’m not afraid of *them.* Know why?

Until next scary scary pussy…