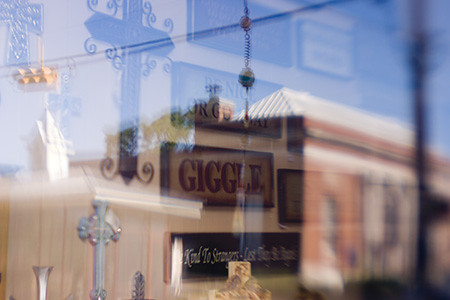 I was flipping channels on my TV late the other night, as I always seem to do when I can’t sleep (which is, well, lately anyway, just plain “always”) when I happened upon a video by Austin’s own Trail of the Dead.

Now, as you probably know, or could have guessed without my help, the Trail of the Dead make videos (they are a rock band and all.) What you might not know, what you might not expect about this particular video, was that it was set (filmed almost entirely) in a church.

Trail of the Dead in a church? You know, you just know, this is going to be good. I mean, this is the band that gave us flying beer banners, shards of low orbiting guitar parts, and a multitude of trashed hotel rooms in their wake. Putting them inside a church? It’s a stroke of genius really. (The only way this could possibly get any better would be if Rob Zombie directed the video. Or, maybe, Alice Cooper. A really really mad Alice Cooper, wearing extra mascara. And, he’d have to make a cameo.)

Imagine being there, being one of the helpless unsuspecting church parishioners, when this lot came along? One minute, you’re quietly preying in your pew, the next your screaming, “Good Lord, save me now! I mean, right now!” as band instruments hurl, folding chairs fly past crucifixes, and groupies flee the scene. (Ah, to be a mouse in that church on that day.)

Now, I know that doesn’t sound very blog worthy at first read, but think about it. This is probably the first time we’ve seen him leave anywhere without a police escort. I mean, we’ve grown accustomed to seeing him hurl shards of broken guitars and little bitty amp remnants at angry mobs. We’ve seen him crowd surf with half a sponsor’s banner stuck to his foot like some giant toilet paper streamer from Hell. We’ve seen his collection of TV’s floating in the pool at hotels across Austin everywhere (and Lord only knows what he’s done with those room service trays. Really. I mean, do you even want to guess where they’ve been?)

Calmly getting up and walking quietly out of a church? Dude, that’s radical.

Hell (and Holiday Inn) hath no fury like the Trail of the Dead.

Until next flying folding chair and crucifix…