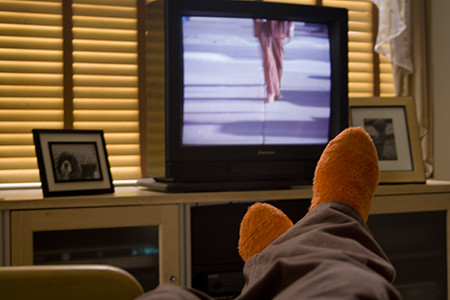 Did you ever get a hole in your sock? Ever have one of those holes that’s *just* big enough for your big toe to *squeeze* into and then get stuck? Man, I hate that.

I have a hole in my sock and it hurts. It really hurts. It’s one of those holes big enough to snag my big toe and now my toe’s all stuck in there. My socks are strangling my left big toe, and it hurts to the point where I can’t walk comfortably. Damn, at this point, I really hate socks with holes in them.

It’s a good thing I’m not President today. Could you imagine that? My assistants come running into my office-the oval office-and say, “Ms. [you just know they’d call me Ms.] President, we have a hot lead on Al Qaeda in Iraq, the Dow is down considerably, and the new economic numbers indicate…”

“Oh damn. These shoes hurt too…” It would be the end of civilization and the free world as we know and like, all the while, my feet would hurt.

I wonder if historical leaders wore socks with holes in them. It might explain a lot of historical events, actually. I mean, maybe Adolph Hitler really liked Jews but hated sock makers, because they once sold him one with a hole in it. Maybe he became an evil dictator, and started killing people, one by one, thinking each the man who sold him the sock with the hole in it, all the while the entire “Jewish” thing was really just a front-a clever ploy to get the sock makers to turn themselves in to be executed.

Saddam Hussein could explain to that war tribunal, “I had a hole in my sock. I didn’t mean to gas the Kurds. Really, I didn’t.” If the people on that tribunal wear socks like mine, they just might fall for it. Maybe Ben Franklin had a hole in his sock but tried to “walk it off” outside, in the rain, during a thunderstorm, with a key and a kite. I mean, couldn’t you just see him hobbling about, favoring his right leg, all on account of that hole?

The worst part of the hole in my sock is not the fact that it’s strangling my left big toe. It’s not the fact that it’s cut off all the circulation to that poor little extremity and I now have this horrific premonitions of getting gangrene from the strangulation or that the socks so tightly wound around my toe that I’m going to be forced to amputate or maybe my toe will just falling off into my sock, my horrible, horrible, hole-y sock. No, that’s not the worst part of it-the worst part of this entire ordeal is that I have a busy day planned.

It’s one of those 18 hour marathon days, where I go to work, update some web content, attend a meeting downtown, and do a bunch of other stuff. I’ve got this entire marathon day planned so I’ll be out on the road, running around, the entire time, leaving absolutely no time to run (or um, hobble as the case may be) home to change socks.

So, gangrene and hobbling aside, I’m stuck in these horrible, horrible hole-y socks until tomorrow, but I’m forced to run around for 18 hours, do ten million things, all the while limping thanks to a stupid strangled left big toe.

Ah, yes, a strangled big toe, on a day like today, I need that like I need a hole in my head. (Um, maybe I shouldn’t have said that.)

Until next oddity from the sock drawer…