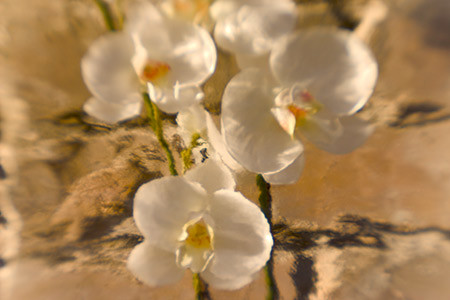 Monday night there was another “grand boop up” at the TiVo factory. Maybe the President gave a talk or there was some kind of breaking news that I missed. I know this because TiVo somehow got itself into a state of being off (Ha! That’s a laugh.) It was running behind by about 20 minutes. Rather than watch half a program or half a crafting show (now, that would really suck) I decided to “unboop” a movie. So, Monday night, I watched Adaptation.

It wasn’t a bad movie, except that it was playing on one of those women’s channels. You can say what you want about Spike TV, the men’s channel, the man show, and all that but, somehow, I can handle the “juggies” bouncing on trampolines a lot easier than I can some of those women’s channels. There’s only so many vitamin supplement and tampon commercials a girl can take. (Do you think I get enough calcium? Nevermind.) And, what’s with all the funky names for tampons? They have all these silly names-names like “pearl” and “silk.” All for a wad of cotton that you’re going to stick into your…so getting back to the movie, I actually really liked it. The extremely “unboopable” Mr. Cage plays a screenwriter (and his annoyingly chipper “brother”) while chasing the author of a book on orchids through Florida swampland. (I hate chipper people, all chipper people. Really I do. I’d say I want to “strangulate” chipper people except that’s not really a word.)

The movie was kind of hard to watch in places because they cut it for TV, so they cut out all those nice words “brought to you by the letter F” and, I’m sure, a love scene or four hundred. It always makes me laugh when I hear people say things like, “you son of a…” or I hear the “you” without the corresponding “phuck” and there’s a odd pause of some kind. Still, I have to admit, the tampon salesman Cage played a convincing writer, there were no visible toilet scenes, and the bitch slapping was kept to a minimum. There were a few, ahem, “fantasy” scenes that were edited for TV as well. (I almost feel sorry for Mr. Cage, I mean, I don’t know which is worse, jerking off for money while cameras are rolling or being labeled a “tampon salesman” by your, ahem, “adoring” fans. Ah, but, on the bright side, maybe he’ll think of blogs like this the next time somebody accuses him of not “suffering” enough for his art.)

The movie was predictable in spots (I so saw that crocodile coming a mile away) but still entertaining.

In the “ok, so I’ve seen a few movies but I am still so out of it and yes, as a matter of fact, I *do* live under a rock” department, I was talking with Terry about the movie and I said, “the orchid lady in it looked kind of familiar.”

Ok, so now that I’ve pissed off half of Hollywood (and ignored the rest,) I can proclaim “my work here is done” and go back to taking pictures.

Speaking of pictures, taking them, and the like, I’ll be away for a few days, and don’t know if I’ll be able to blog or not so, please enjoy these flowers for a spell and I’ll try to return from the wilds with some new material.

What? Were you expecting me to stay under my rock forever?