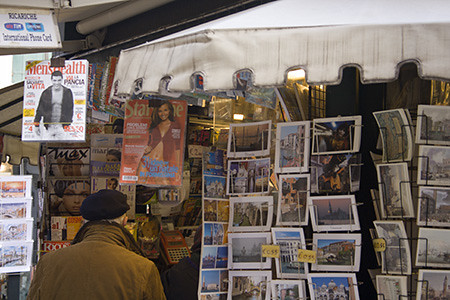 Despite the fact that he took risks, was a proud member of the South African “bang bang” club, and had recently won a Pulitzer Prize for an image of famine from the Sudan, photographer Kevin Carter committed suicide in the summer of 1994, just months after winning the Pulitzer Prize for feature photography.

He was also the subject of a documentary film/photography installation called “The Sounds of Silence” at FotoFest.

Prior to his death, he had traveled to the Sudan to document the horrific conditions of starvation among refugees there. He photographed a young girl (not more than 2 years old) starving while a vulture flew down and landed beside her. He was quoted as saying that he “waited for the vulture to spread it’s wings but it never did.” Nobody knows what happened to the girl in the image, although she probably starved to death in the summer of 1994 (best guess.)

(You can see the image in question if you follow the link to his site.)

After taking this image, and before winning such acclaim for it, Kevin Carter traveled to New York City where he was vilified in the press (by the media as well as the casual observer.) New York, it seemed, was overflowing with cries of “why didn’t he help the girl?” and he was greeted with a “why didn’t you try to feed her?” where ever he went, until he ultimately took his own life just months after winning the Pulitzer, currently the highest award given to a photojournalist.

Keith Carter also had an exhibition at FotoFest. I’ve met Keith before-he’s a nice guy, hailing from Beaumont, TX, a small town not too far from Austin, situated on the Texas coast, outside of Houston.

To be brutally honest, Keith has never been on the short list of my “favorite” photographers. In fact, at the risk of sounding petty, I always thought the adulation paid to him a bit unwarranted. Sure, his work is good but, frankly, I know a lot of really good Texas photographers whose work goes unnoticed, many of whom I feel are more deserving of praise. Austin, in fact, is filled with photographers who are really good, yet often unnoticed. (I could rattle off names and may choose to do so at some point but, without naming names, Austin has more than it’s share of fantastic photographers, despite it being nationally recognized for music more than photography.)

I can’t say for certain if seeing the Kevin Carter exhibition (documentary) softened me up and made me more receptive to the Keith Carter show.

I can say I thought the Keith Carter show to be the best Keith Carter show I have ever attended. The work wasn’t perfect (at one point, I said to Kathy, “Look, that horizon’s crooked,” to which she replied, “Snap out of it! You’ve been lurking in ‘Score Me!’ too long.”) But, it was good. It was moving and “pretty,” and contemporary, filled with images of horses, family, Venice, clowns, and flowers and all kinds of interesting subjects.

Photographers work hard enough. Often it goes unnoticed. Sometimes, I guess, it gets noticed for all the wrong reasons. Sometimes too, I guess, it kills us. The world doesn’t need more critics-it’s harsh enough as it is. I’m not going to stick my hat into that mess, fold my arms, and speak in “theory” about why Keith Carter is not my favorite photographer. Instead, I choose to enjoy the work I saw in Houston, the work I thought was good, the work that moved me at the time

Life’s too short. We have to learn to take the good with the bad. If you see something in a gallery you can’t stand, what’s wrong with just walking away?

Sometimes, it’s a hard choice to walk away, even if your last name doesn’t happen to be “Carter.”