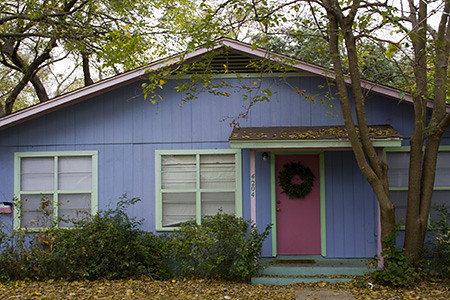 This is another in a series of very typical “Austin-y” homes. Note the (now colorful) mid-50’s architecture, typical of that period, when the majority of the Austin area was actually “developed.”

Speaking of Austin, when I first moved to town (’92 or so) a lot of the local talk centered around what we now know as “the yogurt shop murders.” It was a case involving four teenage girls killed in a TCBY store (for those who don’t know, it’s like an ice cream parlor that sells frozen yogurt rather than ice cream.)

Today, the paper ran a large article about a photography-related murder that happened in Austin some 20+ years ago. Called “The Book of Days Murder” after the fine photographic publication coming from Austin during that time.

When I first moved to Austin, it was an honor to have a photographic image included in “The Book of Days.” It was a small, black and white publication, calendar like really, that featured some very fine artsy photography, and not just work emanating from the local art scene either. Some prominent photographers had work published in “The Book of Days,” which itself ran it’s course and was shutdown mid-1990’s.

The publication has since shut down, the memories faded, the pictures and photographers all scattered to the wind, but one thing remains. That was what was written about in the paper today. That was what has haunted the Austin photographic scene for quite some time. That was the related murder.

You see somebody, knowledgeable about photography, perhaps a photographer himself, started breaking into the homes, apartments, and dorm rooms of the photographers featured in “The Book of Days.” The police know it was somebody who knew a lot about photography because they would steal, for example, all the Leica cameras, but leave behind Pentax, Nikon, or anything that might not be not so obviously expensive, yet steal only photography related items (typically.)

In one such break-in, the apartment of a local musician was targeted, perhaps by mistake (he lived in a four-plex with Austin’s own Ave Bonar and the police think the suspect might have simply picked the wrong door once he got to the address.) The thief made off with a guitar, was chased by the inhabitant of the apartment, who was later gunned down in a alley, very near the UT Campus and the publication home of “The Book of Days.”

The case was never solved. The murder stands as one of Austin’s cold cases, dating back 20 something years. The players in the drama have all gone on to bigger and “better” things. Several police officers, a neighbor who is now a superior court judge, another who became a famous cartoonist, and a backup singer living in LA all, somehow, some little way, have ties to this “Book of Days” murder. The singer/songwriter had a lot of promise, had already recorded an album of material in a home studio, and was pursuing an active music career so the Austin arts scene perpetually wonders “what if?” about this case.

My only question, apart from the obvious “whodunit” is why hasn’t Hollywood jumped all over this one yet? I mean, this has the makings of a Law and Order episode if not an entire murder mystery movie, right?

Perhaps, we should be happy they haven’t, although I can’t help but wonder if the recent media attention will focus new eyes on this old mystery.