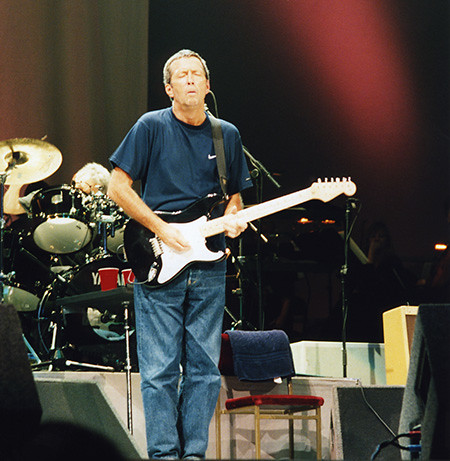 In case you did not know, today is Eric Clapton’s 65th birthday. To borrow a line from one of his songs, “Hello, old friend, it’s really good to see you once again…”

I first heard Eric’s music when I was a young girl. My sister had one of the early Cream albums, and I can remember hearing SWLABR for the first time (“but the rainbow has a beard.”) I couldn’t fathom what I was hearing. It was odd. It was art. It was Dada. It was a bit crazy. It was the 60’s. In a lot of little ways, it was what I’ve been trying to become, as an artist myself, ever since I first heard that song.

I ran into an architect friend today. I was talking with another fellow about architecture, and we really started to get into it. We were discussing mid century mod, case studies, the entire lot of people like Frank Lloyd Wright, and such. We were into it, deeply discussing architectural visions of the great masters.

My architect friend then joined in on the conversation. I realized that he was rather bored with all of our talk. He was not really “into” architecture, probably because, well, he lives it, day in and day out. It’s hard to be passionate about what’s clear in front of your face each and every day, isn’t it? (I suppose, I’m the same way about computers or photos of sunsets, flowers, people’s kids, and the like. After a while, we’re all just “ho hum” about things-even our passions.)

At it’s very essence, art is passion. All the best artists, independent of medium, all tend to be passionate. Artists are souls capable of throwing caution to the wind, taking risks, making bold choices, daring to bear their feelings and creative vision out on a “canvas” (of some kind anyway) for all the world to see and enjoy.

Sure, there are probably better guitar players out there. I’m sure you could hunt high, low, and probably even not too far to find somebody who’s more technically proficient at playing the guitar than Mr. Clapton here. But, let’s see you try to drum up one who plays which such emotion, such passion, and such aplomb. I think that, with all of his experience and emotion, you’d be hard pressed to find an axe grinder quite like that.

So, next time you find yourself thinking that you’re old, or feeling down, for whatever reason, stop and say to yourself, “play it once more…with feeling” and see where that gets you.

Who knows? You just might end up in the “white room” yourself.

Until next birthday greeting…