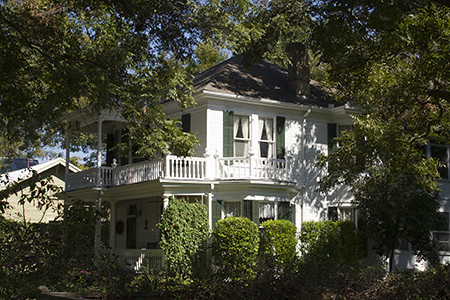 For the longest time I never posted any pictures taken in Austin or “my own backyard” as Barbara used to call it. I was Rolodexing, I was penciling in exotic locales, jaunting off to far points of the globe (as if the globe really had “points”) and I was just so busy running around, I never actually used a camera while situated at home. It was always laundry, more Compact Flash, catch up on the TiVo, maybe pay a few bills, get a quick haircut, book the next flight, and then, BAM, off again, in search of the “exotic” (whatever that might be.)

This was taken in Hyde Park, one of Austin’s oldest neighborhoods. It’s very typical of the houses you might find there. Actually, it’s a very “architectural” shot, even for me (and I do tend to have an architectural leaning, in case you could not tell from peeking.)

I guess, because I live here, it’s not very “exotic” to me but, if you really stop to look at it, it’s the kind of house that makes Austin so special. It’s the reason I moved here and, I suppose, it’s the reason I keep coming back, despite booking flights to far away Italy, funky New Orleans, or southwestern places like Santa Fe.

No matter where you go, the return flight, drive, caravan, or milky way hop always takes you home eventually, right?

At least, we all hope it does, even if you do have to change planes in Chicago.

Until next far away locale…