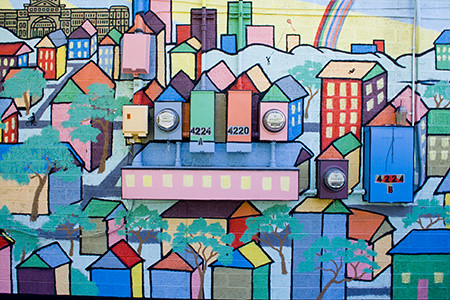 My friend Rose has a new SUV. It’s one of those SUV’s that comes with all those newfangled gizmos, you know, it’s got things like a DVD player that flops down from above, a moon roof that you can open with a remote, automatically folding back seats, and the like. Rose was kind enough to offer us a ride in her fancy new truck.

Buried almost underneath the dash is a particularly interesting gizmo she named Suzy (after the Chinese restaurant.) Suzy, you see, is actually one of those talking navigational systems.

These wonderful (and I use that term loosely, after my TiVo experience and all) new gizmos work by allowing the user (that would be us, the lost photographers, in case you weren’t paying attention) to “punch in” an address or locale of choice and then sit back and listen to the pleasantly timbered simulated human voice guide us along the proper route to our destination of choice. (Ha! Yeah right, like this was going to work. Not with me in the back seat, anyway.)

Rose warned us about Suzy. “She’s kind of chatty,” she said, as we were piling into the back of the shiny new buggy, “sometimes she talks too much but, once you get going, she tends to quiet down.”

From the start, I had visions of some talking TiVo, saying things like, “No, other LEFT, you morons,” while steering us right up to some crime scene tape. I really pictured some demonic talking freak of a GPS, driving us straight up to the gates of Hell (but then I knew from the start really that we were going to Houston, right?)

I also had all kinds of questions. Would it get mad if we made a wrong turn? (“No, you stupid humans, I said LEFT!”) Would it be able to handle Houston traffic without snapping? (“Damn pickup truck. Go back to Katy, you rube!”) What would happen if we were to run out of gas or get totally lost? (“Sure, don’t feed me you bozos! Now we’re really screwed! I told you clowns to take a left and just look at what you’ve done. How am I supposed to get us out of this mess?”)

As it turned out, if you were to make a wrong turn, Suzy would prominately display the word “Recalculating,” take a bit of time, and then generate additional directions. Sometimes, she would guide you in a complete circle, right around the block. Sometimes, she would adjust and take you a different route.

A funny thing about computers-you either trust them or you don’t. Even if you don’t, you probably stop to listen to them when they talk. The world is just not all that full (yet) of the “chatty” variety of CPU.

At one point in our drive, I can remember we were all feeling quite helplessly lost. We pulled up to a fork in the road, were collectively faced with the classic right vs. left decision, and all leaned into see what Suzy was going to do. It seemed like the world stopped. Everything came to a stand still. The car behind us stopped, the car in front, long gone, the traffic light didn’t blink, nobody in the car spoke a word, and we all sort of leaned in to wait for Suzy to yap out her deterministic choice. It was as if the entire universe and galaxy as we know it were in a sudden state of limbo, eagerly awaiting Suzy’s “left” or “right” response and we all sat there mesmerized by the “Recalculating” delay. (It was almost like waiting for a shoe to drop really.)

Parts of Houston (I-10, and the rest of Texas really) were under construction. They recently added a lane to the right of I-10 which we used during our return trip. During this time, Suzy kept urging us, “slight left. Merge onto the highway” probably because we were driving on the newly constructed portion of the road, and she didn’t yet know that it was available. (She was fooled by those dreaded satellites into thinking we were still on the access road.)

She seemed a bit curt and even sometimes “snippy” when we didn’t listen to her suggestions (but then, what do you expect? She’s not human after all.)

After we stopped for gas, she seemed particularly upbeat, at which point, somebody in the car remarked, “well, of course, we fed her.”

I have to admit that Suzy was quite entertaining. She made the trip kind of fun, helped with the directions, and we never really did have to pull out those old standbys: the maps. We did drive around the block a few times but, as the evening sun set on the Houston skyline, I kind of enjoyed the warm, comfortable, blue glow coming from under the dash.

If I had to have a GPS in my car I don’t think I would mind it really. Life with Suzy would never be dull, although, I have to admit, you’d probably always know where you were going, wouldn’t be able to drive along new highways, and would get more than a little sick of hearing the phrase, “slight left. Merge onto the highway.”

It beats going crazy trying to find a map, that’s for sure.

Until next “chatty” CPU…