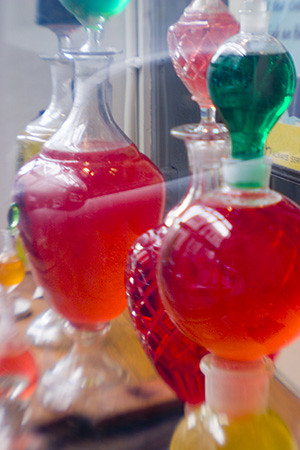 The other day, Steve says to me, “So, when are you going to tell us what you did during your 8 hour marathon layover in NYC? You blogged about all the possibilities, but you never told us what you ended up actually doing.”

Short answer? I went to the “stink-a-teria.” I don’t know what it is about duty free stores but they all seem to sell perfume, lots and lots of perfume. Sure, there’s an occasional smoke or handbag thrown in for good measure but, if you ask me, “duty free” roughly translates to “stinky” in 17 languages or so.

There’s tall perfumes, short perfume bottles, fancy perfume bottles, plain perfume bottles, perfumes that smell like roses, perfumes that smell like other flowers, perfumes that don’t smell floral at all (musk, anyone?) guys cologne and trendy new fragrances-I got to smell that new Calvin Klein scent, Euphoria, the day it came out (was nice, actually. I liked it, in as much as I could actually like a “stinky” new perfume that I would never actually buy or wear.) Celebrity perfumes (one has to wonder, really, when JLO stinks up the joint, if she really smells like what’s in that bottle) and perfumes from people you’ve never heard of (ever hear of Shizuoka, Japan? No? Well, now you know that they have an entire museum devoted to perfume there, not just a signature scent.)

Now, typically, when I go to a department store, I try to avoid the perfume and cosmetic areas, even if it means I have to walk 22 miles through the shoe department and the baby sections. (Men’s shoes, at this point in time, look all that much more appealing to me, believe me.) I just can’t take those ladies who assault you with bottles and atomizers of the expensive stinky stuff. But, there’s something about being in an airport, something about having way too much time on your hands doing nothing, that makes me ok with venturing into the land of a million smells. It beats watching those arrival/departure flickering TV’s or sitting in one of those $1 for a massage chairs without forking over any change any day, right?

Upon being approached by a well-dressed woman, wrinkling up her nose at him and saying, “you smell,” I believe it was that great philosopher, Yogi Berra who famously replied, “no, lady, I stink, you smell.”

So, now you know.