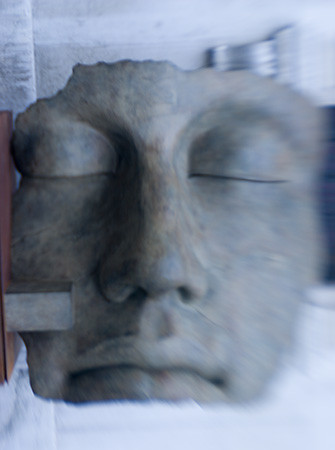 In the “by the time you read this, three more have come” department, it would appear that my TiVo’s new favorite ubiquitous actor as of late, Mr. Nicolas Cage, is in fact the poster child for the Encore Movie Network. Hey, how was I supposed to know that he does nothing all day except stand around on HBO with his face hanging out?

(Just how many movies has this chap made and, more importantly, how many more can my TiVo hold without imploding upon itself? Makes you wonder, but not too long, which, ahem, “fine flick” TiVo is “unbooping” as we “speak.”)

And, speaking of faces, my reflection series has now, officially, been put to bed and today brings us the beginning of Faces from Venice. (Enjoy!)

But, I shouldn’t be too hard on that poor old chap, Cage, because, well, today is, in fact, his birthday. I know this because his picture was in my newspaper this morning (And there’s no telling, really, what he’s done with my Law and Order re-runs.)

Funny thing about the paper today too-the ubiquitous Mr. Cage’s photo appeared next to an article about a certain English woman who (I swear I’m not making this up) pled guilty to embezzling nearly 1 billion dollars from her employer and then sued because, in fact, she had spent considerable (said) funds on Elvis Presley records and memorabilia and wanted to keep the loot.

[Ahem, that’s Billion with a B, B as in “Boy, that’s a crapload of money” not Million with an M, M as in “didn’t you notice it missing, Morons?”]

I mean, come on, if you were to successfully embezzle 1 billion dollars, would you really buy anything Elvis related at all? New house, new car, diamond rings, sable coat, start your own space program (“send a monkey up to mars!”) I could understand any of those, really I could but, come on, Elvis memorabilia? (Makes my head shake like Shakira just thinking about it.)

Elvis may be dead, he may have left the building and now, according to a British court ruling, money from Julie Wall’s Elvis trove must be auctioned off and used to repay her billion dollar mishap.

(And, to think, she could have been in Biminini with a cabana boy all her own.)