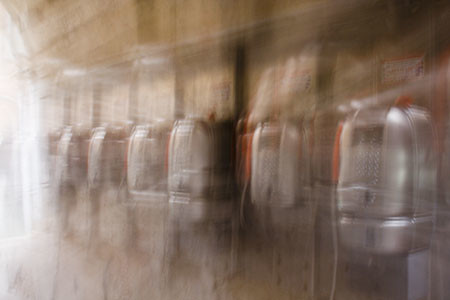 This is sort of an experimental shot-although it did not start out to be so. I started to take the picture and then realized that it was way too dark in the little corner I was standing to work without my tripod. So, I opted to open slowly the zoom lens on my camera while it was taking, figuring that, since this shot was blown anyway, I might as well play some and attempt to try and make something of an otherwise completely blown image. (Yes, I know there’s a delete button but, geesh, I grew up with film and old habits die hard, don’t they?)

I think, apart from the “when you get lemons, make lemonaide” aspect of this one, it does kind of work for me. It’s a bit abstract but then, as you know, I’ve been on a big abstract kick as of late so it fits with my current body of work. It kind of goes with the subject matter as these telephones are famous (or so I’ve been told, I didn’t actually get to use one) for working/not working/sort of working/working only during a full moon on alternate Thursdays kind of a thing.

When you get crazy Italian phones, make lemonaide but be sure to spike it. Yeah, that’s it.