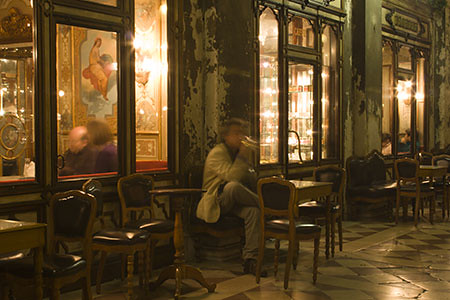 Last night, for the first time, I saw an episode of Desperate Housewives-my friend, Steve, invited me over to watch it with his neighbors, as they do every Sunday evening.

When I was in Italy, a few people asked me about the show. Apparently, it’s quite the talk of the town all over Europe, which made me joke about the “great” American contributions to the free world as we know them: McDonald’s, Starbucks, Desperate Housewives, I Love Lucy, Law and Order reruns, and Coca Cola. Truthfully, I think that Lucy is really the only “great” contribution-the rest are guilty pleasures at best or perhaps items for which Americans should truly be sorry and apologize, but that’s a debate best left to pundits who can pontificate the benefits of mediocre TV, marginal coffee, and soft drinks capable of stripping paint off automobiles. I just wanted to check out the TV program.

It was sort of interesting. It’s kind of funny. Frankly, I could see how people could get addicted. It has a certain quality that would draw folks in, kind of like that old “moth to a flame” adage but only in pixilated TV format, complete with minute and a half commercials apropos for the new adult risque-TV watching set. That and, of course, the new McDonald’s theme, “I’m Lovin’ It” run over and over again for your viewing pleasure.

Of course, we really didn’t have to wade through the commercials, as Steve has a TiVo. His, albeit it cursed, is actually capable of recording “real” TV programs and, as such, leaves me a bit jealous. (Yes, it’s true, I heard the faint rumble of the TiVo “boop” and didn’t get to see any Charles Manson or Jeffrey Dahmer video dioramas. But then again, he hasn’t recently seen any Nick Cage movies either, so life’s not all wine and roses for poor Steve, living in the land of the “cursed” TiVo and all.)

TiVo be damned, I came home afterwards, only to watch more of the “boob tube” and wade through more Compact Flash, but didn’t get very far, having fallen asleep after a whopping half a Gig, waking up to find, yes it’s true, a Law and Order rerun playing while I was drooling onto my keyboard.

This shot was taken at Cafe Florian, in Piazza San Marco, in the heart of Venice. This is, as you may know, home of the world’s most expensive cup of coffee, as well as a place where, in the evenings, folks can go and smoke. We met this fellow who, as it turns out, was from Sri Lanka, but visiting to enjoy an evening tap off of cafe and a late night smoke. He had been sitting with the folks inside the cafe but opted to “puff” his way outside the joint, so as to not smoke up the place.

You can almost “peek” inside and see that Florian does come complete with some antique oil paintings/frescos on the walls so, at least, your 18 Euro grande cafe comes with a bit of a view.

All that and caffeine’s addictive too. Who would have thunk it?