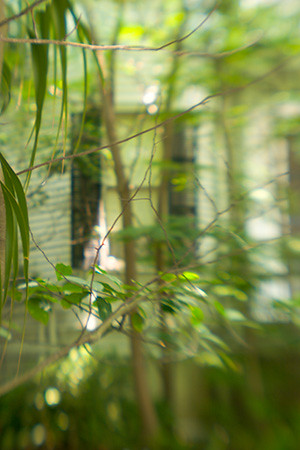 This is not a house in Bartlett, Texas and, as far as I know, Nick Cage doesn’t live here either.

Speaking of our favorite little hidden hamlet of Williamson County, for those who have not been following the news, the Mayor of Bartlett, Texas has been arrested recently on DUI and money laundering charges.

An interesting thing about small Texas towns, as is the case in Bartlett, often times the mayor is also the fire chief, the school board president, the police capitan, and the head of the PTA (and that’s, typically, just for starters.) He probably also ownes the local Texaco along with more than his fair share of billy goats (“Texas, it’s like a whole ‘nother country.”)

For those who have been following the case, it’s turned into something almost amusing (well, it would be amusing if it weren’t so darn TRUE.)

The mayor, you see, took a jaunt down to Travis County (land where he does NOT reign supreme and, I’d guess, more people than not have seen Nick Cage movies as opposed to owning multiple billy goats.) Anyway, while he was, ahem, “jaunting,” he got pulled over on a DUI and wasn’t able to channel my Nick Cage-eating TiVo long enough to act all sober on us (“Damn it, those peons in Travis County keep moving that dotted white line. You honestly expect me to heel-to-toe this!”) After further investigation into his, ahem, esteemed business dealings (schnanagins) it was discovered that he’s also been laundering money (and I don’t mean at the local washateria, which he probably owns as well, ok?) The Texas Rangers (no, they aren’t just a baseball team anymore) had to step in and take him down-seeing as he’s also police chief and, since this is Texas, probably owns more than his fair share of large caliber side arms (he’s got to have something to protect himself from all those free roaming billy goat’s, right?)

Recent humerous headlines on the topic read, “Mayor of Bartlett Denied Ankle Braclet” (the Travis County Judge, in his infinite wisdom, denied the mayor’s request for “roaming” bail, choosing to not grant him an electronic monitoring ankle braclet the likes of which, I take it, are reserved for more “hardened” criminals-you know, the ones like Martha Stewart.) And, my favorite from today, “Mayor of Bartlett Asked to Leave Town.” That’s right. They’re actually running him out of town, probably after meeting at midnight in front of the old saloon. (I couldn’t make up stuff this good, believe me.)

I don’t really feel for the mayor at all, despite the fact that I’ve spent more than my fair share of time in Bartlett, Texas.

For those who don’t know, my photography group (hey, photography “hoodlums” just doesn’t have the same ring to it, ok?) used to frequent Bartlett shortly after they filmed a movie there. “The Stars Fell on Henrietta” was supposed to be Oscar worthy, never really made it out of the shoot, but left plenty of “way cool” (to use a Hollywood term) props behind for us to shoot, including, what looks like an authentic Wrigley’s Chewing Gum mural circa 1950 (remember the Wrigley’s girls? Well, they were cool, even if you don’t.) Presumably, the movie did not star Nick Cage, although I can’t be quite certain, seeing as it’s another in a long chain of movies I’ll probably never waste my time viewing (but, damn, I could kiss the prop master.) Why couldn’t my TiVo be more productive and eat movies like this instead? I mean, wouldn’t it go a long way to keeping them out of the general population? Nevermind the fact that they don’t feature Jeffrey Dahmer in a starring role, they were set in a location that’s now got a mayor/police chief/goat master on the lamb, doesn’t that count for something?

I just wonder who’s going to get custody of all those billy goats when all is said and done and the mayor has to turn in his 1400 shotguns and his little gold sherif’s star.