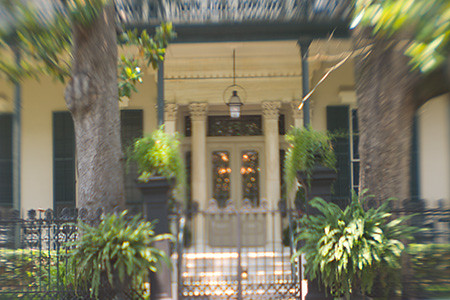 I thought it fitting that today, on Day of the Dead, I would put up a picture of a gothic-style house. I’d say Boo! but that’s really more appropriate for Halloween. Today is the day hordes of Mexicans chow down, get drunk, and party down in cemeteries across colonial cities like Oaxaca so, like, have a little drink, eat a little chow, and shake them bones tonight, ok?

In gothic news, I googled (yes, it’s now a verb too!) and found out that Trent Reznor actually sold this house to John Goodman (AKA “another actor I’ve never heard of”) rather than Nick Cage (who’s just not TiVo-licious enough for this house, I guess.)

I’m fully convinced that TiVo will one day actually record a Nick Cage movie (maybe even with a soundtrack by Trent Reznor) at which point, I will keel over from the ensuing conniption, but that’s a blog for another day. It would make for a great marketing motto on Halloween, though, don’t you think, “TiVo, it’ll kill ya.” Well, at least, it’s better than the alternative “Boop you!”

And, to complete this slightly scary gothic circular reference, I also found out (courtsey of the Great Gods of the Googly Moogly) that Trent Reznor is, in fact, renting the Hollywood home once barraged by none other than Charles Manson and the Manson Family Clan (for those who don’t remember, they are sort of like the Osmonds, only they didn’t have quite the dental work.)

Ah, the horror of horrors. Mr. BlackOne rented the home of Mr. Murder and TiVo isn’t even there to record all the fun that’s sure to ensue. Makes you wish Mr. Reznor had some kind of a web-cam, doesn’t it? (Well, if he did, my TiVo would be all over it. Waaaay before Steve’s still cursed one. So there.)

The online article I read did say that Mr. Reznor was kind enough (or maybe weird enough?) to keep “the door.”

Mr. Reznor, it seems, recorded an album in the aforementioned “house” (but, alas, not this house, which has gone on to bigger and better fame. Ah, to be owned by the likes of some actor who’s never heard of me either. At least my TiVo doesn’t have to unboop him too.)

Almost makes me get my TiVo thumb-up out of my TiVo ass, get off my duff, and go out to take some more gothic pictures.