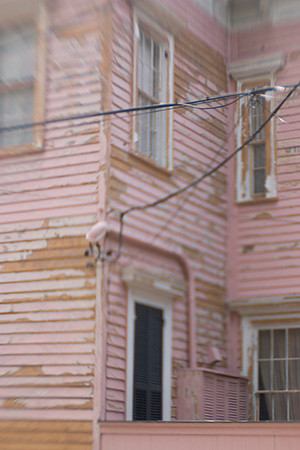 This picture has lots of wires in it. My first photography teacher, Barbara, used to LOVE wires. She would always say, “people who think they can eliminate wires from photos are kidding themselves. Everybody knows they invented the camera AFTER electricity.” I guess she’s right. I guess electrical wires have always been there, but we collectively don’t like to call attention to the them, for one reason or another. (Maybe we do like to collectively kid ourselves into thinking that the world is a “pretty” place-that would be one without electricity, I suppose, but also one lacking in the unsightly wire department.) Perhaps, we should wise up and collectively celebrate our ugly wires. They do, afterall, provide so much to so many with so little, don’t they?

In Austin this past weekend, they had a KKK rally. Now, I’m not a big fan of the Klan, and I definitely don’t support their viewpoint on the proposed marriage ammendment, but I’m a super proponent of free speech. Yes, it’s ugly but true and it’s a slippery slope we regress. What’s free speech for you and I amounts to granting the Klan a permit to assemble and yap out their pieholes about whatever racially strewn hatred they are pushing this week.

It’s an unfortunate truth, but one that we must cherish. If we don’t enjoy our free speech, if we allow our governments, be it local, state, federal, democratic, republican, green, or whatever, to start telling us who can talk when about what, we’ve reached an end to civilization as we know it and can no longer call ourselves true “Americans.” Lack of free speech is reserved, in case we’ve collectively forgotten, for places like Cuba and we’ve already proven that we can win the “big one” to oust folks like Hitler, who would have “free speech” so long as you see things their way.

We don’t, however, have to agree with what people say. To bell the voice of dissidence is just as American as fighting to give others the right to speak.

As far as the Klan is concerned, we don’t have to listen, and we don’t have to fight. We can choose to just ignore them in a collective (but intelligent) “turn it off, man, I’ve seen too much” gesture that shouts out volumns by not saying a word.

Or, we could (as some in Austin chose to do this past weekend) elect to protest.

Several years ago, I participated in a “moon the Klan” rally. It was actually quite fun. For those curious, we were told to avoid the actual display of public indenceny but, instead, elect to metaphorically “moon” the Klan by lashing out in our own little ways. It was a fun day, with people bringing families, neighbors coming together to stand up for values they believe in, and Klan members outnumbered by a factor of about a hundred fold.

This past weekend, in Austin, there was another “moon the Klan” type of rally, only this time, things got out of hand. It was marred by violence and Austin PD had to arrest several protestors. The Klan showed their “strength” by parading 15 people on the steps of the capitol building downtown, while the protestors were held back by APD wearing riot gear.

I was saddened to hear that folks got all riled up over the Klan and that things turned ugly. Do I listen to the KKK? Nope. Never have, never will. Do I support their right to free speech? Yes. I would stake my life on it. It’s what makes our country so great and it’s what generations of my family have fought (and died) for.

The world would, in fact, be a wonderful place if we all collectively lived in “little pink houses” but, despite our best attempts, we’d still have to live with our wires showing. Those wires are make us who we are so, Barbara’s right, we should celebrate, rather than try to hide, them.