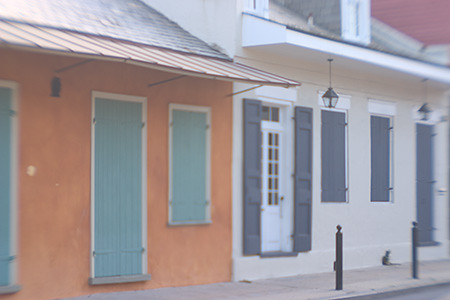 This is from, where else, but the French Quarter. I really like the way this one prints, so I’ll probably include it in the New Orleans series. It actually prints really nicely, since I can easily hike the contrast and the saturation. It was shot in very low, morning light and the lack of shadows helps a lot with that.

I just saw that Craig has returned from London. Well, maybe not returned but has started posting images from there, so I’m going to try to keep it short so that I can go check out his work. I’ve been waiting for him to take this trip for a while, because I know that the stuff you can do in England will fit nicely in with the style of work that he does. I can’t explain it but, somehow, I feel like this trip will either be a shinning success or a total train wreck. If he were more of a “newbie” photographer, I would bet on the wreck but, since he’s so accomplished, good money would go for the shine. He really is a great photographer, so I’m really looking forward to what he’s going to do there, just in part because I know the nature of the work that you can do there and I can see how it might fit into what he does. That and I just can’t wait to see what he’s going to do with it.

Sometimes, when you are just starting out as a photographer, you think that you want to take all these trips-to go see stuff-get out and photograph and all. That’s a great idea, and it works in theory, but the problem is that, sometimes anyway, you need to get some experience as a shooter under your belt, before you can really go out and make something with a travel location. It’s not as easy as it looks on TV-you can’t always just trot out to Tripoli, snappy new camera in tow, and hope to come home with gobs and gobs of great shots-all “keepers” one after the next. There’s a lot of work that can go into taking (and, really making) a shot that happens sort of behind the scenes. It gets into your head. Photography is as much a mental journey as it is a physical one.

Sometimes, for me anyway, it’s actually harder to shoot afar then it is right in my own backyard.

My photography teacher, Barbara, always used to say, “People have these notions that they have to go out and shoot someplace exotic. You can make great images right in your own backyard. If you have a tree and a wall and a shadow, and you are good enough, you can make a career.” That’s very true, despite the fact that it’s still fun to travel.

There’s something about going someplace *else* to shoot-seeing something new, tasting new foods, maybe hearing a different language, seeing different sights, that can really inspire. But, even given the right inspiration, we’re still shooters trapped inside of ourselves-we only bring with us to a location shoot as much “camera fu” as we came in with-no more, no less. We’re only as good as we are good and yet we expect our vacation pictures to be so much more.

Sometimes we get lucky, I guess. And sometimes, we have folks waiting back at home to check out what we dragged back that didn’t fit into the suitcase.