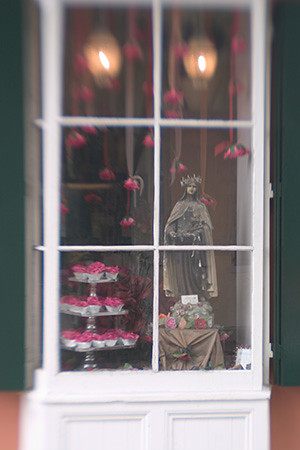 Sometimes, when you take pictures, in order to really evaluate them, you cannot let sentimentality get in the way. Sure, we all love grandkids but that doesn’t mean your baby snaps should be hanging in the Louvre. But, you love them because they are yours, you took them, you were “there,” and so they hold a special place in your heart (as do, it goes without saying really, your babies.)

When I look at this picture, I don’t actually see a Madonna, a cupcake plate, and a bunch of hanging roses (what’s with the cupcake plate anyway? Pfft. Only in New Orleans.) No, what I see is sometime entirely different because, well, I was there and it was there when I took the picture so, in my mind anyway, they are intrinsically related, forever juxtaposed in my psyche (or something like that.)

When I look at this picture, I think back to where I was standing when I took it. I envision, not fantasies of Church-going heathens, tender fragrent mercies from roses, or even delicious cupcakes on a pretty silver tray.

No, when I took this picture, I was almost run over by a truck.

I was standing in the middle of the street, you see, because I wanted to get this shot. Off in the distance, I heard the familiar “rumble rumble” of an oncoming vehicle but I choose to ignore it, instead inching closer and closer to the window, snapping my shutter continuously as I moved my tripod closer to the safety of the sidewalk. It wasn’t until I reached the curb that I looked back over my right shoulder to see the big truck about to “rumble rumble” and run me right over.

Now, this is one image that everybody seems to like. It wasn’t first on my list, but it’s growing on me. Everytime I look at it, I see less and less of “truck” and more and more of Madonna with Roses. Hopefully, one day, I’ll just forget the truck completely but probably not.

Images have baggage just like people. They just aren’t always as obvious about it. (Anything that comes from imagination can really lead you into darkness if you let it, I suppose.)

And what is up with those roses anyway? Roses, cupcakes, and a madonna? Hocus pocus, what do you think is out of place in this picture?