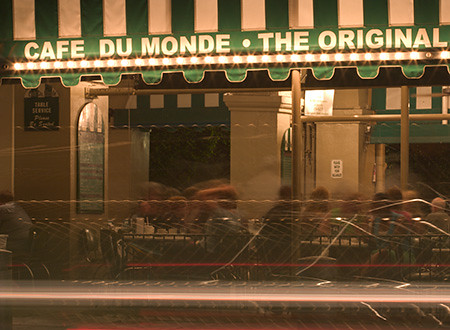 So, today there was this story, with two pictures in the paper, about how Cafe Du Monde re-opened and is once again serving up beignets in the French Quarter. One of the ladies pictured in the paper was the waitress while we were there, she took our table. I almost felt like waving, except that, somehow, I knew the newsprint would just not wave back, no matter how hard I tried.

Even so, I just could not resist including this in today’s blogger, as a tribute to the folks who are hard at work, restoring some sense of “normal” to the French Quarter. Well, I suppose, as much as the French Quarter could be “normal.” (It’s nowhere near “normal” on a good day, ok?)

Cafe Du Monde is an interesting place. Sure, it’s mostly a tourist trap but, isn’t that why we travel anyway? I mean, don’t we all have these collective check lists that we mentally mark off, “New Orleans. Check been there. Had a beignet at Cafe du Monde. Double check. Carriage ride in Jackson Square…check-a-roo…”

The way we travel in modern times, we hardly get to experience anything more than the tourist ghettos, but it’s ok because, well, there’s still something to be said for getting out and getting to see the tourist traps of the world. It beats sitting in your Barcalounger and cussing at the evening news anyday, right?

When I was younger, I wanted to get an education. I thought that, if I could only get those magical “pieces of paper” that told the world I was smart-that I meant something, my life would be complete. Now that I have a master’s degree, I’m older and wiser, I think that my only form of education is really travel. I’d too damn old and crotchety to sit in a classroom anymore. (Those days are long gone. Beignet, anyone?)

Travel is what expands our horizons. Travel is how we learn. Travel is how we get to see new things, meet new people, taste new foods. We’re collectively so busy with our routines, our everyday lives chip away at us, until there’s nothing left but an appetite for travel, which we quench with the occassional (bi-yearly if we’re lucky) jaunt to a tourist trap off in another city. (And those folks, if they are lucky, come here maybe.)

I suppose folks from New Orleans enjoyed, in some small way, coming to Austin to see our tourist traps too. It’s just what we do and who we are these days.

The beignets are really good at Cafe Du Monde. The Cafe does provide a “normal” anchor in an otherwise crazy place. Cafe du Monde is open all night and always filled with people getting their fill-be it local folks or people from Peoria, stopping to rest after seeing the French Quarter for the first time. You can sit by the water, in an open air Cafe, eat your beignet, while watching the horse-drawn carriages clomp down Decatur Street at night, carrying more tourists, mentally checking off more items on their “must see before I die” lists. It’s a vicious cycle but, hey, at least the food’s good.

I suppose you’d never really know that unless you’d been there.