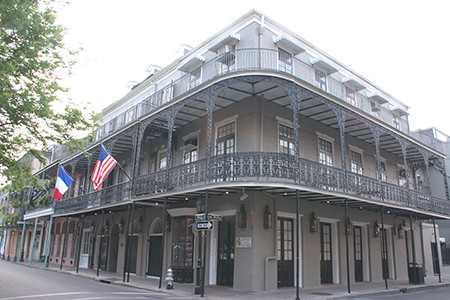 This shot was taken on the corner of St. Philip and Royal Streets, hence the name. I like sneaking signs into my shots-it makes for easier captioning later on.

I don’t like the cropping, but I can live with it. The sky is a little dull, although I like the “point” up on top of the building. I do like the flags and the tree along the left edge.

This is one of the shots that made it into the Hyde Park show although, in hindsight, I really don’t like it. It probably won’t exhibit along with any of the other New Orleans work anymore. Unless I just clone stamp the death out of that sky and do something about the point along the bottom edge.

Actually, framing it did help the “point” go away. I was able to crop out a bit more to make it look deliberate, not “chopped” as it looks more in this shot.

It was kind of hard to shoot the architecture in New Orleans. It’s fun to look at, and especially to walk among, but it can be difficult to shoot. The buildings are tall (most are three stories) and the streets are narrow. A lot of times stuff is just “in front” of you and you don’t know what to do with it. A wide angle helps a bit, but then there’s debris and other stuff you want to take out in the way.

I think I had the best luck going for unusual angles and the like. Kind of like some of the still from the Preservation Hall series-the ones where the horizon is not level. Usually I don’t take images like that but I tried a few experiments and they seemed to work in New Orleans, because of the “tight” nature of the place.

Well, maybe how “tight” it used to be. Don’t know now if any of this is even still standing but, here’s hoping.